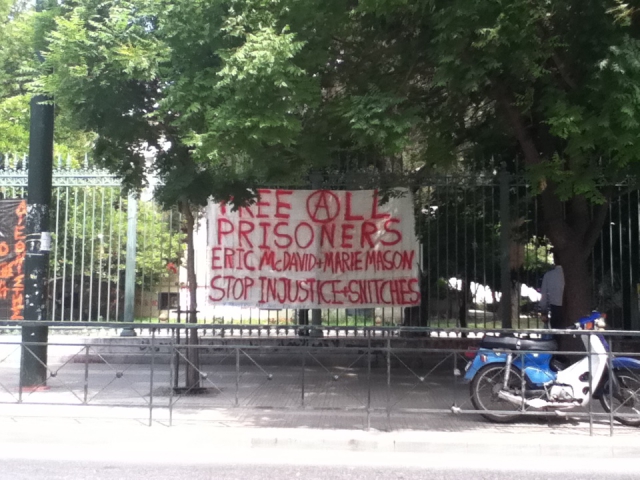 Banner displayed at the Poytechnic university in Athens, Greece, 2011

Information on June 11 events in 2012 and new resources will be coming soon to the June11.org site.

In the meantime, here’s a little recap from last year: On June 11th, 2011 events were held in approximately 30 cities across the globe in solidarity with Marie Mason, Eric McDavid and other long-term anarchist prisoners. Hundreds of people participated in this international event – and Marie and Eric received letters, pictures, love and energy that were poured into making this day a celebration of resistance and an expression of solidarity with our friends and loved ones on the inside.

Amongst solidarity actions around the world included: ATMS in Argentina burned, arson of church construction site in Peru, anti-bank action in Cambridge, UK, Railways sabotaged in Finland, Logging Equipment Sabotaged in Olympia, a series of attacks claimed by ELF Russia and the Informal Anarchist Federation, development building and bank visited in Tacoma, SUV Attacked in Seattle, Banners hung at universities in Greece.

These stories are only a small sampling of what happened on June 11th, 2011. But they are representative of the kind of creativity and energy that we would like to see poured into prisoner support every day of the year. We want June 11th to be a starting point – not an end in itself. We hope that everyone feels re-energized and re-committed to the work that they do, to their communities, and to our friends, lovers and comrades who are being held hostage by the state.”