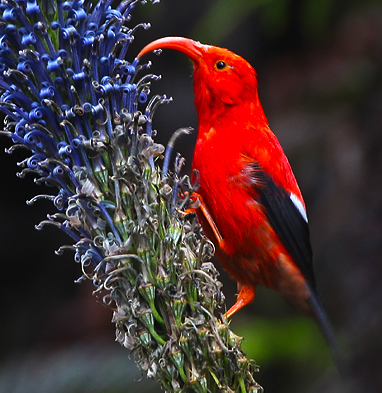 (Washington, D.C. , March 16, 2012) A new 30-minute film, narrated by actor Richard Chamberlain, explores the on-going bird extinction crisis in Hawai’i that has led to about 70 percent of all native bird species in the state becoming extinct.

The film, Endangered Hawai’i, was produced by American Bird Conservancy (ABC), the nation’s leading bird conservation organization, with funding by the National Fish and Wildlife Foundation. It is being premiered at the Environmental Film Festival in the Nation’s Capital, March 24 (at 12:30 and 2:00 p.m.) at the National Wildlife Visitor Center in Laurel, Maryland.

With beautiful footage of some of Hawai’i’s stunning birds and their habitats, the film showcases the unique biodiversity of our 50th state and explains the environmental crisis that has caused Hawai’i to become known as the “Bird Extinction Capital of the World.” It describes the nature of the crisis, its causes, and current efforts to implement solutions for species remaining on the brink.

“It is shocking to many people to learn that there is no place else on Earth that has witnessed the levels of bird extinctions that we have seen in our 50th state, a place that normally conjures up images of lush vegetation, sun, beaches and a refreshing tropical climate. It is our aim with this film to make not only Hawai’i’s past and present problems known to a wider audience, but to also demonstrate that with the full commitment of the state and federal government and non-governmental organizations, we have the ability to turn the situation around and prevent further bird extinctions,” said Dr. George Wallace, Vice President for Oceans and Islands for ABC and the lead collaborator on the film.

Since the arrival of Europeans to the Hawaiian Islands, 71 bird species have become extinct out of a total of 113 endemic species that existed at the time of first human colonization.  Of the remaining 42, 32 are federally listed, and ten of those have not even been seen for up to 40 years.

A key species of concern is the Kiwikiu, or Maui Parrotbill, a honeycreeper that was once widespread on Maui and Molokaʻi, but which is now limited to approximately 500 individuals high on the windward slopes of Haleakalā volcano. Another honeycreeper, the Palila, was once found throughout the Hawaiian Islands, but now clings to less than five percent of its original range on the Big Island of Hawai’i. Meanwhile, the Nihoa Millerbird, endemic to the small, rocky island of Nihoa, is down to as few as 700 individuals, and the Ākepa is already extinct on O’ahu and probably Maui, too.

The film points out that the primary threats to Hawaiian birds are exotic species: predators such as feral cats and rats; herbivores such as goats and pigs that degrade native habitat; diseases such as avian malaria and pox transmitted by non-native mosquitoes; and plants that displace native species and reduce habitat quality for native birds. Climate change may further reduce or eliminate mosquito-free – and hence disease-free – upland habitat as temperatures rise.

An encouraging note highlighted in the film is that in areas where there has been aggressive conservation action to reduce these threats, Hawaiian birds have stable or increasing populations, and new projects underway are also making a difference. For example, a fence – the first of its kind in the United States – has been constructed to keep predators out of seabird nesting habitat at Kaʻena Point on O’ahu; a 52 mile fence to exclude mouflon sheep and goats from Palila habitat on Mauna Kea is under construction; and a new initiative to create a second population of the endangered Millerbird on Laysan Island as insurance against the species’ extinction is showing encouraging early signs of success. ABC is working with state, federal, and NGO partners such as the U.S Fish and Wildlife Service and the State of Hawai’i to implement on-the-ground projects to overcome threats to some of Hawai’i’s remaining rare species.

The film says that significant federal funding is key to reversing the current trends that are negatively impacting bird populations. Unfortunately, the resources directed to Hawai’i’s environmental problems are alarmingly low in proportion to their need. While Hawaiian birds comprise one third of all U.S. bird species listed under the Endangered Species Act, only 4.1% of funding for recovery of listed bird species is directed their way.