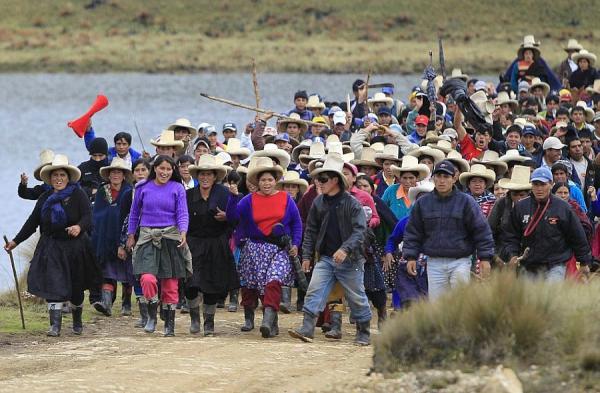 Andean people protest against Newmont Mining's Conga gold project during a march near the Cortada lagoon at Peru's region of Cajamarca, November 24, 2011.

[EF! Newswire note: the politics behind this story are tricky. We suggest reading more background on recent mining struggles to get a clearer picture of the context in which these protests have occurred.]

The miners are protesting against tougher penalties for illegal mining.

Local officials said police were far outnumbered by the protesters, who are trying to take control of the airport at the city of Puerto Maldonado.

The miners say the new rules will put them out of work, but the government says the sanctions will encourage miners to get the necessary permits.

An estimated 50,000 miners do not have a licence to operate.

The government says large areas of jungle have been destroyed by illegal mining and large portions of the area’s waterways show high levels of mercury, used in the mining operations.

Officials say they want the miners to obtain the correct permits and to abide by environmental rules, but the protesters accuse the government of wanting to hand over mining concessions only to large multinational companies.

The latest protests erupted after talks between the government and the miners broke down on Tuesday.

Regional President Luis Aguirre described the situation as “untenable”. “You can hear gunshots throughout the entire city,” he said.

Police have asked for reinforcements as 700 officers were outnumbered by more than 10,000 protesters.

Informal miners also held protests in two other regions, in Piura in Peru’s northwest and in Puno in the southern highlands bordering Bolivia.

Peru is one of the world’s major gold producers and high prices have sparked a boom in recent years.

The government has urged the miners to return to the negotiating table for more talks scheduled for Friday, but it is not clear so far if the miners will attend.