In an open letter, several organizations including Colorado American Indian Movement, Deep Green Resistance (DGR) Colorado, Front Range Rising Tide, 350.org, Occupy Denver and Boulder Food Rescue announce they coming together for a demonstration on Saturday, March 10th, with families from the local communities that are directly affected by the Commerce City Suncor refinery and against Suncor and their oil seep contaminating the Sand Creek and South Platte River: 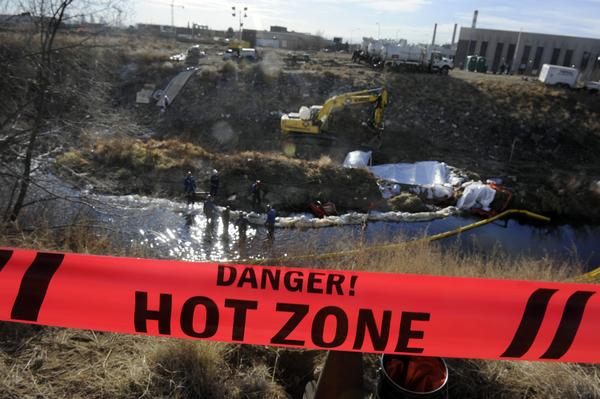 “We are asking everyone concerned about our water, air, land and future to stand with us.

Over the last year, many people and various organizations have united to oppose the Alberta tar sands and the Keystone XL Pipeline, correctly recognizing these industrial projects as ecocidal insanity. Here in Colorado, oil from the tar sands is refined by Suncor Energy. By participating in the process of facilitating genocide against the aboriginal people of Alberta, Suncor Energy has toxified our air, land and water without end.

By bringing together active members of the Colorado community in coalition, we will align together to force Suncor to stop destroying and poisoning our world, both here in Colorado and in Canada.

On Saturday, March 10th, we will occupy the ‘hot zone’ on the shore of Sand Creek, where carcinogenic benzene from Suncor’s refinery has been seeping into the water. By occupying the hot zone, we hope to bring public attention to the fact that Suncor is killing Colorado communities, water and wildlife, and to force this industrial polluter to confront the effects of its actions. It is also our hope to form strong alliances with one another and begin to work in partnership so we can effectively move forward against Suncor’s unethical and irresponsible practices.

We will meet between 1:30 and 2:00pm at 5001 National Western Drive on Saturday, March 10th. From there, we will carpool to 64th Avenue and York Street, where we will park and walk to the site of the action at the confluence of Sand Creek and South Platte River. Food will be provided by Boulder Food Not Bombs, and representatives from various groups will be speaking. Be aware that fumes from the oil and the refinery can sometimes make the area uncomfortable for people with compromised respiratory systems.

It is our hope to see as many of you as possible at this demonstration. Suncor is actively destroying our Mother Earth, and must be stopped.  Suncor’s role in the tar sands is contributing to a devastated climate and is harming indigenous communities in Canada as well as people living in local communities in Colorado. Please join us on March 10th to stand against these injustices and degradation of our Earth.”