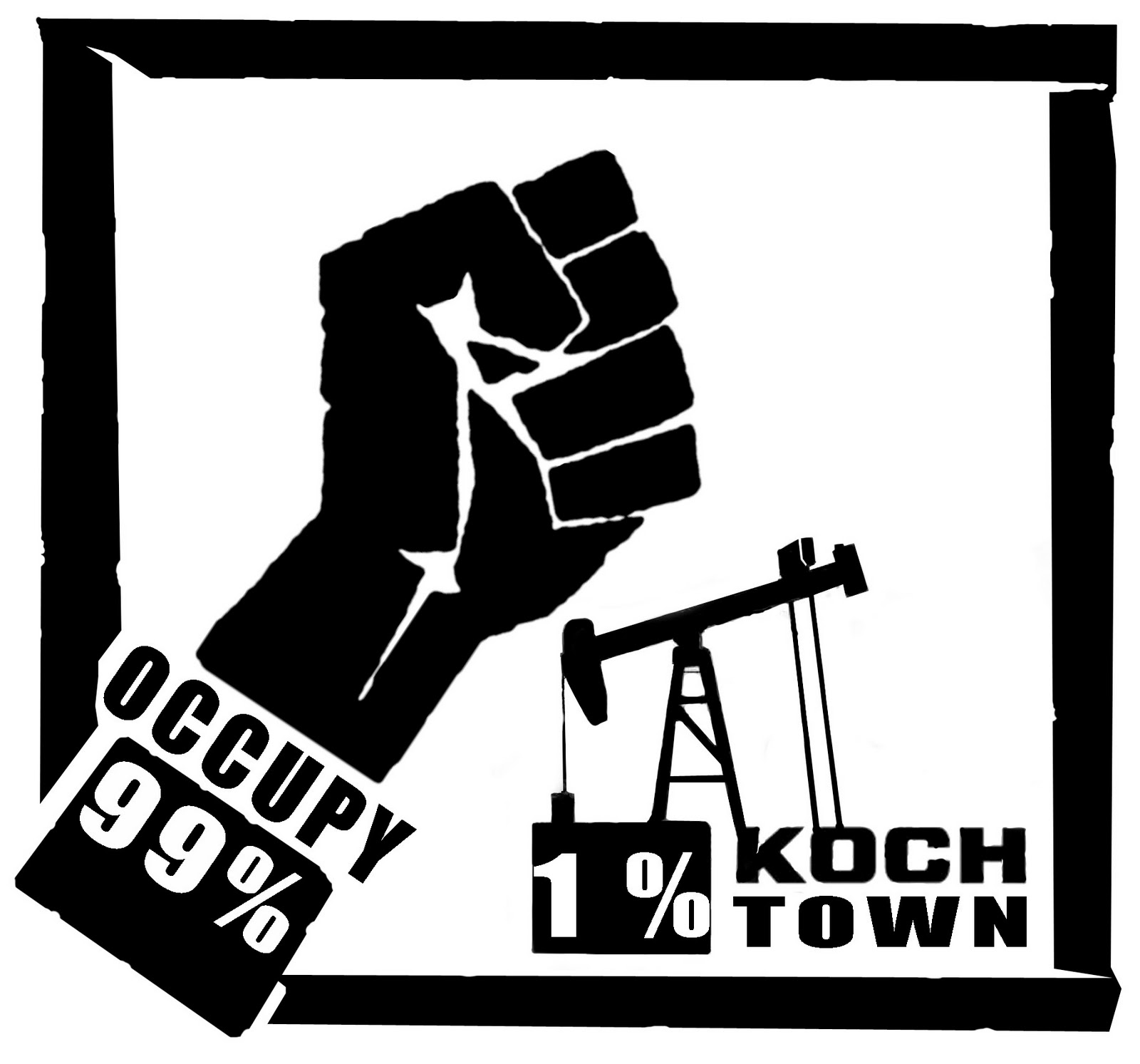 By Hurst Laviana, The Wichita Eagle
Activists from across the country will gather this weekend in Wichita to attend a series of “Occupy Koch Town” events that will focus on energy, environmental and climate policies.
Yvonne Cather, one of the event coordinators, said the 500 people who have confirmed that they will be attending the event are coming from as far away as San Francisco, South Dakota and Washington, D.C. Cather said she was hoping that area residents would attend one or more of the events.
The group’s schedule shows that many of the activities will take place Saturday at the Grand Chapel, 828 N. Broadway. The group has scheduled a Saturday afternoon march to the Kansas Policy Institute at 250 N. Water, and will have a potluck lunch on Sunday at Chisholm Creek Park at 29th and Oliver.
Scheduled speakers will address a variety of climate and environmental issues, but a Koch Industries spokeswoman said she suspects the event is based on the false notion that Koch has played a role in the proposed Keystone-XL pipeline.
“As we have previously stated, Koch Industries has no financial stake in the Keystone pipeline, and we are not a party to its design or construction,” Koch spokeswoman Melissa Cohlmia said in a statement of the proposed 1,700-mile pipeline from Canada to the Gulf of Mexico. The Kansas portion of the pipeline has already been built and has been in operation for about a year.
One of the Occupy Koch Town fliers says, “Tell the Koch Brothers: No Keystone XL Pipeline.” But the schedule also mentions that the event “will include focused discussions of how energy policy is endangering our climate and ecosystem, and how corporate dominance of politics and distortion of science, exemplified by the Koch brothers, is perpetuating bad energy policy.”
Cather said all participating groups oppose the pipeline, but she said it was not the overriding factor it holding the event. The sponsors of Occupy Koch Town include the Kansas and Missouri chapters of the Sierra Club and the Occupy movements in Wichita, Lawrence, Kansas City, Tulsa, Oklahoma City and Barber County.
Koch Industries, based in Wichita, is one of the largest privately held companies in North America, with annual revenue of about $100 billion, according to Forbes magazine. It operates a number of businesses in about 60 countries, including oil refineries and pipelines. Charles Koch, its chairman and chief executive, and his brother, David, are longtime contributors to conservative causes.
Cohlmia said in her written statement that the protest “is a politically motivated attack and an attempt to harass and demonize an American company with 50,000 U.S.-based employees – 2,700 of those in Kansas. We would encourage the protesters to turn their attention to matters that are real and pressing such as excessive government spending, more than $15 trillion in federal debt, and onerous regulations that are crippling our nation.”

(Moderator’s note: The Koch Bros claim to have been receiving death threats from Occupy protesters, and are acting all scared, hiding away behind their gilt mirrors in their palaces of gold and ivory. Expect some tense moments…)