Japanese whalers asked a US federal court in Seattle to make the Sea Shepherd Conservation Society stop harassing them during their whale hunt in the Southern Ocean. Based out of Friday Harbor, Washington, Sea Shepherd and its lawyers argued the Japanese had no jurisdiction, and that whaling is not a legitimate business, anyway.

“If a heroin dealer came to federal court and sought an injunction to be able to continue to sell their heroin in a particular neighborhood without interference from anyone, I have no doubt that the court would turn them down,” said Dan Harris, Sea Shepherd’s lawyer.

Outside the courthouse, Gavin Carter, a spokesperson for the whalers, complained about the ruling. “You can’t have anarchy on the high seas,” he whined. Apparently, he’s never met Sea Shepherd founder and patriarch Captain Paul Watson, a man known for his top-down, authoritarian ways. If he had, Carter would know that Sea Shepherd sees itself as an enforcer of international laws that protect marine life. If anything, it’s the government of Japan that’s advocating anarchy, illegally hunting whales to sell their bodies for food.

This ruling comes less than a week after a standoff in sub-zero Antarctic waters between Sea Shepherd activists on a jet-ski and three inflatable boats, and the Nishin Maru 2, a Japanese harpoon boat. The spray from a water cannon on the harpoon boat hit the activist on the jet-ski in his chest, causing him to fall into the frigid waters. He was able to make it back onto his jet-ski and return to the Steve Irwin, a Sea Shepherd vessel nine miles away.

Sea Shepherd is promising to keep up their campaign against the whalers until the hunt ends at the end of March. 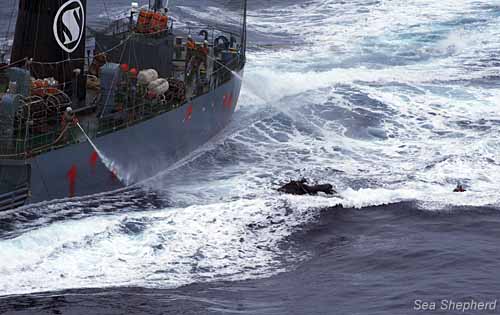