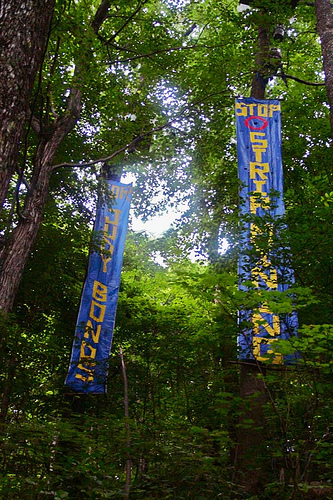 Banners in honor of Judy Bonds hand from treesit, Summer 2011

and other updates from Appalachia

The trial for Squirrel, one of the treesitters from Coal River Mountain campaign featured in the last Earth First! Journal (Mabon 2011 issue), is scheduled at 9:30AM on February 9th in the Raleigh County Magistrate Courthouse in Beckley, West Virginia. The other sitter, Becks, had their pre-trial postponed and is still awaiting a trial date.

In other updates from the good folks at RAMPS: “Finally, we have a campaign space! We welcome you to come live and work with us in our cozy one-room cabin in the woods of Pax, WV.  We’re completely off the grid! The cabin boasts solar panels that provide our electricity, a woodstove that burns salvaged wood for heat, and a spring where we can collect drinking water.” Because our home sits right on a pond and is surrounded by streams, we hear the constant tinkling of flowing water. Out back, on a hillside covered in clubmoss, we’ve got two heated tents with more bed space—so come join us and fill them up!

Permits and Opposition: Arch coal is once again attempting to expand its left fork permit by applying for an addition that would bring the edge of the permitted area right up to the boundary of the battlefield. Send in your comments to oppose this this permit before February 2! Here is a sample letter.

On January 18th, Patriot Coal Company lost a lawsuit over selenium discharge from three of its mountaintop removal sites. The environmental organizations that sued Patriot took a settlement that will force Patriot to pay for the cleanup of the selenium, a process estimated to cost hundreds of millions of dollars.

Debbie Jarrell and Amber Whittington have appealed the “Collins Fork Remediation Project,” a 250-acre surface mining permit on Coal River Mountain that includes a valley fill. The hearing for the appeal with the Surface Mine Board has been scheduled for this Valentines Day.

On January 24th, the DEP released a contracted study that claims that no link can be made between the polluted water in Prenter, WV, and the mining activity and slurry injections above that community. They claim, based on a one-time water test from 33 wells, that the hydrology of the area did not allow for pollution from mining activity above and that only one of the wells exceeded primary drinking water standards. This study directly contradicts a June, 2011 study that found that leaching coal slurry was migrating into the wells of homes below, and presents yet one more example of the DEP cranking out questionable science to support the coal industry. (more information at here)