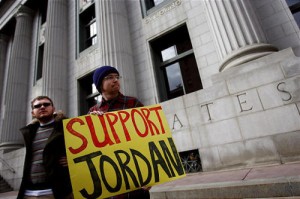 Utah animal rights activist Jordan Halliday has begun a 10-month prison sentence for refusing to testify before a federal grand jury about his political beliefs and political associations. It is believed to be the first time in two decades, and only the third time in U.S. history, that someone has been imprisoned for criminal contempt of court after already serving prison time for civil contempt–all because of his principled stand against what activists call a political witch hunt.

The Utah grand jury was convened in 2009 to investigate the release of mink from Utah fur farms by the Animal Liberation Front. Halliday refused to cooperate because grand juries have historically been used against social movements (as they are now being used against antiwar activists in the Midwest) in fishing expeditions.

When you walk into a grand jury, you check your rights at the door. You have to answer questions about your politics and your friends. You don’t have the right to remain silent. If you refuse to cooperate and “name names,” you can be sent to jail. That’s what happened to Halliday.