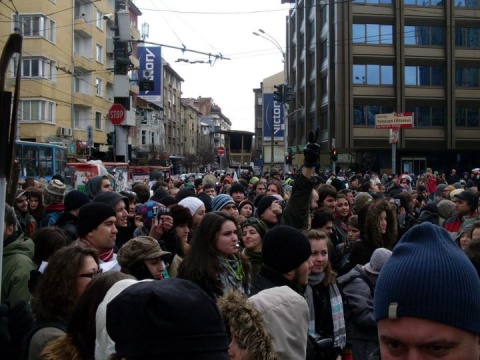 Bulgarian citizens have rallied in capital Sofia, as well as in Varna and Shumen, to protest against the imminent exploration for shale gas in the country.

The protesters, including environmentalists and ordinary citizens, have requested that the Bulgarian Parliament impose a moratorium and later a regulatory ban on the exploration and production of shale gas in the country.

They see the novel method, involving so-called hydraulic fracturing, as highly risky, with many instances of poisoning of groundwater reported globally.

Over the summer, the Bulgarian government granted a concession to US energy giant Chevron to explore for shale gas in a large segment of Dobrudzha, north-eastern Bulgaria.

Dobrudzha is one of the main agricultural regions of Bulgaria, producing a large part of the country’s grain. It also holds important groundwater reserves.

In Dobrudzha’s largest center, Dobrich, hundreds gathered Saturday to express their opposition to the exploration of shale gas.

A similar protest is being held in nearby Varna on the Black Sea, Bulgaria’s third largest city.

More than 1,000 gathered downtown in capital Sofia on a protest march against shale gas, which is planned to end with a protest in front of the House of Parliament.

Some activists have claimed that Chevron exploration for shale gas in Bulgaria has already started undercover, in spite of assurance by senior government officials that finalization of the contract is outstanding, and that the company will have to present an environmental impact assessment.

Later Saturday afternoon a protester reported that during a meeting Friday, key ruling GERB party MPs, including Parliament Speaker Tsetska Tsacheva, had assured they made a “political commitment” to pass legislation banning the exploration and production of shale gas in Bulgaria.