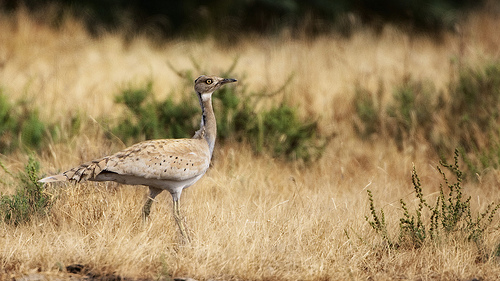 On December 30, a number of environmental groups held a protest in front of Tunisia’s Qatari Embassy. These organizations have called upon the new government, and various civil society groups, to halt the hunting of Tunisia’s endangered species practiced primarily by wealthy citzens of the Arab Gulf. These groups have also demanded for the improved enforcement of Tunisian law, as well as international agreements, regulating the hunting of the Houbara Bustard and the Rim Gazelle specifically.

The protestors blamed the former regime for permitting princes, and other wealthy citizens of the Arab Gulf, to hunt these endgagered species for political purposes. Fouazi Belhaj, President of the National League of Hunters, stated that this protest aims to appeal to the authorities of the new government to protect these species.

Abed Majid Dabar, an enviormental activist and a specialist in wild birds, stated that if nothing is done to prohibit these hunting practices, the Houbara Bustard and Rim Gazelle could face extinction. He also explained that the protest was completely apolitical, and advocates solely for an environmental cause.