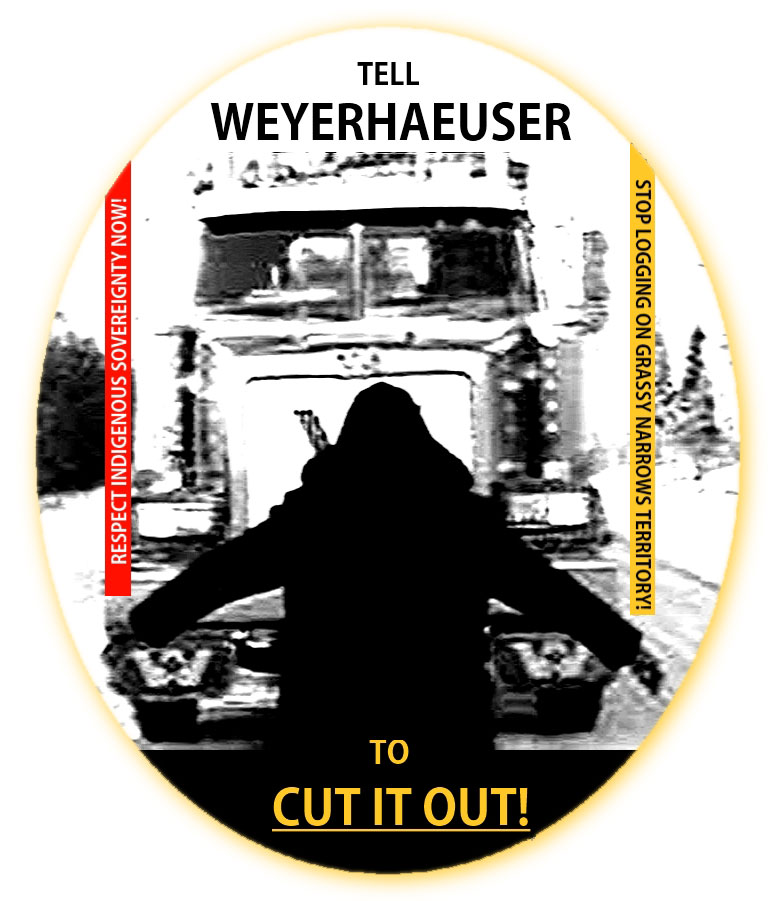 A Message Delivered to Weyerhaeuser Canada/U.S. and the Province of Ontario:

Take notice that until such time as you cease all logging and sourcing in these contested territories, or as long as there is community opposition to your operation in Asubpeeschoseewagong Netum Anishinaabek traditional territory (Grassy Narrows First Nation) we will be calling for a complete boycott of all Weyerhaeuser products.

Your withdrawal from this territory will be a significant step in preserving what remains of the intact forest which is crucial to the Anishinaabe way of life, estimated to be only 30 percent of what it was before mismanagement by logging companies.

As you know, The Ontario Superior Court of Justice recently released a lengthy decision in Keewatin v. Minister of Natural Resources (Keewatin), which held that the Province of Ontario lacked authority to “take up” lands for forestry, or other activities that may significantly infringe upon First Nations’ hunting and fishing rights, with respect to certain lands under Treaty 3 (the Keewatin Lands). This supports the position of Grassy community members who have been engaged in the longest standing blockade in Canada, at Slant Lake near their reserve, since 2002, when they stood in front of logging trucks to protect their traditional lands from further logging.

Grassy Narrows is trying to rebuild an economy and way of life that have been devastated by decades of severe environmental contamination and destruction. The people of Grassy Narrows have already made it clear that multinational logging companies like Weyerhaeuser are incompatible with their vision for the preservation and use of their territory.

A recent unfavourable independent audit contains a staggering 21 recommendations to address material “non-conformances to a law and/or policy” and “a significant lack of effectiveness in forest management activities.” The report concludes that, “forest sustainability…will not be achieved unless corrective measures are immediately taken.” This independent audit of logging in the, 964,000 hectare, Whiskey Jack Forest, from 2004-2009, clearly indicates that the forest has been mismanaged and is in decline.

We call on you to join forest products companies; Boise, Abitibowater, Domtar and Ainsworth, who have already agreed not to source conflict wood from Grassy Narrows territory.

We maintain that it is not only unsupportable, but unethical for Weyerhaeuser to resume sourcing from the Whiskey Jack, for the Kenora, Ontario, mill, that makes Weyerhaeuser iLevel Trus Joist Timberstrand Laminated Strand Lumber (LSL), or any other forest products.