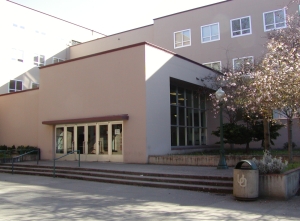 Building Raided by the Animal Liberation Front in 1986

Recently I had the good fortune of getting access to a rare ALF document retrieved from the University of Oregon’s internal files. Someone had found the original typed communique sent to the school by the Animal Liberation Front after their raid of the U of O’s labs in 1986, and offered it for publication here – to be read in full, maybe for the first time since the 1980s.

Over 200 animals were rescued in the raid, equipment destroyed, and photos confiscated. The ALF issued this communique in response to misinformation about the raid spread by the university.

The person who found the communique scanned the original document, which I am posting here. To my knowledge, this communique has not been published in full for 25 years – if ever.

The entry for this raid from the ALF Diary of Actions reads:

The only person to admit to a role in this raid is Jonathan Paul, recently released from prison, after serving 4 years for another ALF action: burning down the Cavel West horse slaughterhouse in Redmond, Oregon. As part of his plea agreement in that case, Paul admitted to a role in a host of other Animal Liberation Front actions, including the raid of the University of Oregon labs.

Take inspiration from this well-written, powerful, and little-seen ALF document.