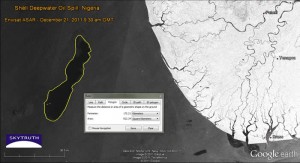 Royal Dutch Shell announced on December 21, 2011 that about 40,000 barrels of crude oil leaked into the Atlantic Ocean from the Bonga Deep Offshore Oil Fields. Shell operates the oil field, located about 120 kilometers southwest of the Niger Delta, on behalf of the Nigerian National Petroleum Corporation under a production sharing contract. The oil spill is reported to have occurred while a vessel was being loaded with crude oil. The Associated Press reported on December 26 that the oil spill had been contained. SkyTruth, which monitors oil spills, reported on December 27 on its website that its satellite images taken over the last few days do not contradict Shell’s claims that the spill is contained.

However, an article on the website, AllAfrica.com claims that crude oil “started arriving in the communities along the Niger Delta Coast.” Deputy Director of the Nigerian Maritime Administration and Safety Agency (NIMASA), Captain Warredi Enisuoh said that delegates in the Niger Delta area on December 26 cannot yet confirm the source of the crude oil. “But from what our team has just seen, it is appalling, it is not very good to see,” Enisuoh said.

“Like I have said, this one that we have found which is currently threatening the Coast at the moment has to be dealt with immediately and it will not be right to go for or blame somebody. I think the effort should concentrate on fixing the situation as soon as possible,” Enisuoh added.

“If you go into the ocean you will find the thick slick of crude oil floating, tossed here and there by the waves. It is spreading according to the direction of the current. That is what we are seeing even right here at the waterside on St. Nicholas,” said Lucky Tema, a fisherman.

“Actually we started noticing this crude oil on the Atlantic a week ago. But it came ashore about two days ago.” He added, “We want Shell to clean up the spill and compensate us for loss of livelihood. Our business has been impacted. Bonga fish that used to come to the surface are no more. The company should not deny us of our Bonga with their Bonga Facility,” said Ayeomane Ayela, a fisherman.

Democracy Now (DN) reported that communities along the Delta are on alert about the oil spill. During an interview on December 27 with Amy Goodman of DN, Nnimmo Bassey, executive director of ERA, said that the oil spill is “hitting the shores in very far and a wide range of places.”

ERA’s monitors “are reporting ground onshore and along the coast, and we are seeing evidence of the crude that is coming from the Bonga field,” Bassey said. Bassey added that Nigerian regulatory agencies are not able to verify if Shell has stopped the flow of crude oil.