[note from a perceptive blogger about the author’s terminology: because the power-lines were sabotaged for financial gain on the black market, the term vandals is used. But had these actions been carried out to fight for a healthier Earth, the term terrorism would have been used] 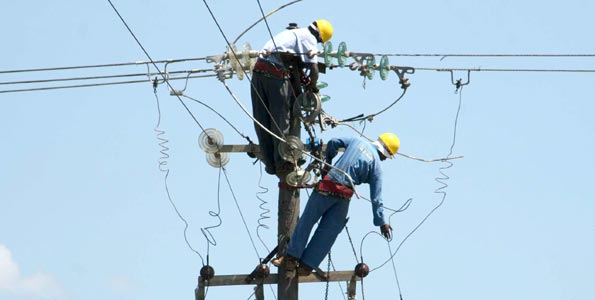 Kenya Power maintenance staff at work power lines. An interruption of power supply attributed to vandalism has halted pumping of fuel by the Kenya Pipeline Company city depot, forcing oil marketers to transport the products from Mombasa to Nairobi by road.

An interruption of power supply attributed to vandalism has halted pumping of fuel by the Kenya Pipeline Company city depot, forcing oil marketers to transport the products from Mombasa to Nairobi by road.

The slower mode of transport could see inland markets, especially those in western Kenya, experience shortages during the Christmas break when demand for petrol and diesel increases by 25 per cent.

“We are pumping at half our capacity. We have so far lost 20 hours of pumping capacity,” said Mr Philip Kimelu, the operations manager at the Kenya Pipeline Company (KPC).

On Tuesday, KPC asked the firms to transport oil products from Mombasa by trucks following the vandalism of Kenya Power equipment in the Lukenya area of Machakos, about 40km east of Nairobi. Kenya Power managing director Joseph Njoroge is today expected to give details of the vandalism and when normal power supply would resume.

The outage has already caused shortage of diesel in Nairobi and Nakuru and super petrol Kisumu.

“Diesel stocks are critical in Nairobi while Kisumu has no super,” Mr Kimelu said.

Major towns, he said, have about five days of super petrol left while Eldoret has 18 days’ diesel, thanks to ongoing test runs of the newly built Sh15 billion parallel line. The line will be commissioned next week.
Mr Kimelu said that the delivery of 22 million litres for super and 13 million litres of diesel would be affected until normal power supply is restored.

Kenya Power says replacement of the two damaged towers may take up to two days before normal electricity supply to affected customers along Mombasa Road can resume.

Kenya Power spokesman Migwi Theuri said yesterday that the pumping station was connected to an alternative power supply from midday enabling the firm to pump fuel products but at a reduced pace.

Major marketers said they were giving preference to their outlets and not those of competing small independent dealers because of expenses involved in transporting products by road.

Kenya Power said the outage lasting 20 hours was occasioned by theft of steel braces on the high voltage power line that supplies KPC pumping stations along Mombasa Road, leading to the collapse of two towers in Lukenya. The braces support the towers along power lines.