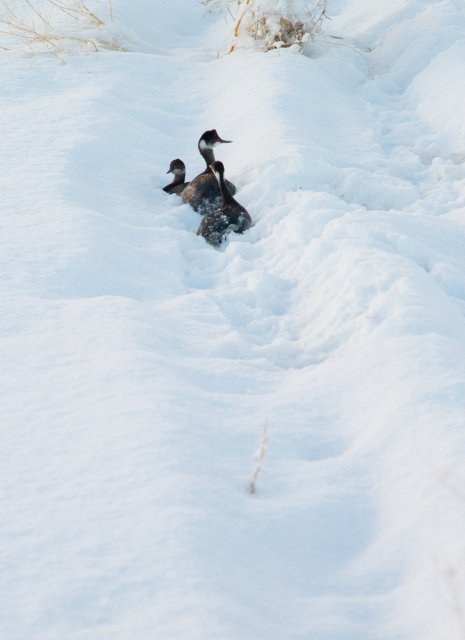 Three eared grebes unable to take off in snow in Cedar City, Utah. Photo from the state Division of Wildlife Resources.

Officials believe the animals, called eared grebes, were confused by snow and artificial lights. Stormy weather on Monday night covered roads and open spaces in Cedar City in snow, which appeared to shimmer like a body of water.

Grebes are small to medium-sized birds more adapted to diving and paddling in water than walking on land. The animal migrates southward late in the year to Utah’s Great Salt Lake, where it feeds on shrimp and flies until it returns to its northern breeding grounds in late March.

Photos released by the Utah Division of Wildlife Resources showed eared grebes being released at Grandpas pond in Washington County.

The Salt Lake Tribune cited an official from the agency as saying an estimated 5,000 grebes tried to land Monday night, and that 35 percent of the birds died during the attempt.

According to the Spectrum, there have been no reports of injuries among residents in the city or damage to property.

It is the worst bird die-off since nearly 5,000 red-winged blackbirds were killed due to blunt-force trauma in Arkansas in January. The National Wildlife Health Center and the Arkansas Game and Fish Commission both concluded that the blackbirds, which have poor night vision and do not fly at night, collided with structures and power lines after loud noises, including New Year’s Eve fireworks, flushed them out of their roosts and forced them to fly at lower altitudes.

Birds, migratory or otherwise, face a similar risk from bright lights and glass windows from tall structures, which disorient their natural ability to navigate using natural light. The animals can either crash against the building or get “trapped” by light, causing them to circle the structure for hours until they die from exhaustion.

Cloudy or foggy conditions exacerbate the danger by forcing the animals to fly lower. Other causes of bird deaths include habitat loss, poaching, diving for bait used for longline fishing, and poisoning from lead used in old paint, fishing tackle and ammunition in upland hunting. Chicks also die of dehydration from being unknowingly fed regurgitated food containing plastic and other trash floating in water.