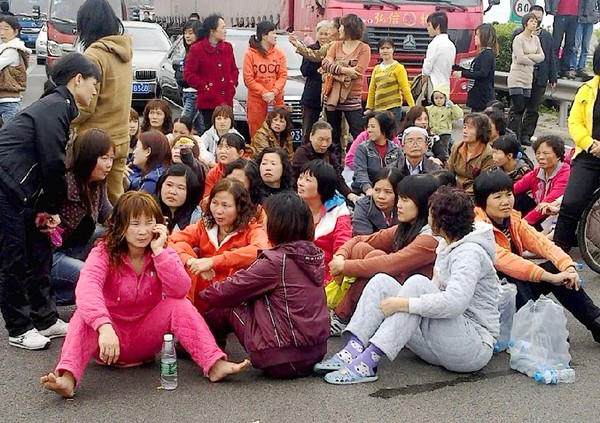 Residents revolted Tuesday against development plans in yet another town in Guangdong province, redoubling the challenge to the Communist Party in China’s most affluent and open-minded region.

The newest uprising involved as many as 30,000 people protesting plans for a coal-fired power plant in the southern seaside town of Haimen. Residents stormed local government offices and blocked a busy highway that runs from the manufacturing hub of Shenzhen to the city of Shantou.

Although organizers denied there was any copycat effect from protests in Wukan, a village 70 miles away where residents booted out local government two weeks ago, the similarities were striking enough to be unnerving to a central government that values stability above all.

Protesters say riot police reacted harshly to the Haimen uprising, beating demonstrators and firing tear gas into the crowd. There were unconfirmed reports that a 15-year-old boy had been killed and dozens of people badly beaten.

“The guy was lying on the ground and not moving after scuffling with the police,” Lin Zutao, a 25-year-old protester, said in a telephone interview Tuesday.

The demonstration started peacefully. Photographs showed many elderly people and children among the crowds surrounding the government offices, with lines of riot police keeping watch. But it grew more chaotic as some protesters moved on to block the highway and threw bottles at police.

The catalyst for the demonstration was a plan by local government to build a second coal-fired power plant despite environmental problems caused by a plant that began operations in 2008. Residents said the plant destroyed the area’s fishing industry and contributed to a rise in cancer rates.

“Our homeland was once so beautiful and now it’s so polluted,” said an anonymous letter posted online. “To my 100,000 fellow Haimenese, we need to stand up. Today we are not rioting, but we need to be angry.”

Lin, the protester, said, “The pollution is so bad, we have no way to live here.”

He emphasized that there was no relationship between what was happening in his town and Wukan.

“We have already been talking about preventing this plant from being built for one to two months, so I don’t think the Wukan protests have had any influence on us.”

In Wukan, a village of 20,000, residents were enraged that the local government confiscated farmland for a Hong Kong real estate developer. Early this month, they in effect forced local officials to flee the village and they set up barricades at the town entrance to keep out authorities. The dispute escalated after a popular villager named to negotiate with authorities was arrested and died in custody, apparently beaten to death, although the government said he had a heart attack.

Nearly two weeks after the death, authorities had yet to return the body of Xue Jinbo, 42. Villagers were planning to hold a march Wednesday to demand that the body be released for an independent autopsy and burial. Negotiations between protesters and authorities continued late Tuesday.

There were reports that Wukan residents were receiving conciliatory messages from the province’s deputy secretary of the Communist Party, while an offer was on the table for the developer to return more than 400 acres.

Chinese scholars have estimated that there are as many as 90,000 “mass incidents” each year in this vast country, many of them triggered by land confiscation. Nevertheless, the Wukan protest drew international attention because the villagers went as far as to evict local government and have refused to be subdued.

Wen Yunchao, a Guangdong activist and writer who is now working out of Hong Kong, does not expect the protests to evolve into a nationwide uprising.

“The timing is not ripe for things to evolve the way they did in Tunisia,” Wen said. “You have to remember, too, that this part of Guangdong is not typical of China. They can watch Hong Kong television. They are exposed to different points of view and foreign media.”

The Chinese government isn’t taking any chances. Wary of publicizing what happened in Haimen, the Guangdong traffic radio channel reported Tuesday only that the highway was blocked in both directions because of a “traffic accident” and instructed drivers to take an alternative route.