Check out the blog theObserverTree to get real time updates and offer support.

by CRAIG HOGGETT / The Mercury 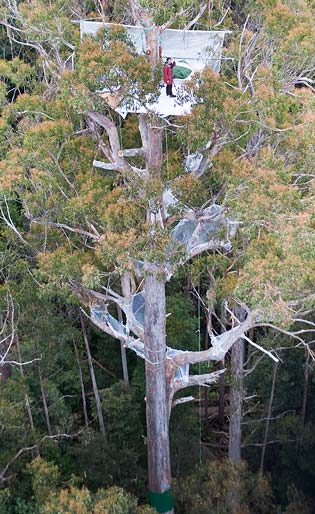 [On December 14, the Tasmanian forest defense group] Still Wild Still Threatened…set up a 60m-high tree sit-in at the TN044B logging coupe near Maydena inside the 430,000ha being assessed for reserve status under the forestry peace deal.

The “Observer Tree” will be occupied by SWST’s Miranda Gibson, who was one of two activists assaulted by workers during a protest in 2008.

Speaking to the media via mobile phone from the platform, Ms Gibson said she would maintain a blog and a web camera to broadcast to the world.

“It’s a different approach because one of our major concerns is that there is a misconception out there that the forest has been protected,” Ms Gibson said. “We want people to see what is happening in the forests.”

She said she was committed to staying on the platform until logging in 13 coupes inside the area being assessed for protection stopped.

Technical difficulties prevented Ms Gibson from speaking to journalists via video-link, but SWST expect the webcast to be up in the next few days.

Senator Bob Brown yesterday used his taxpayer-funded charter allowance to hire a helicopter to allow media outlets to photograph and film the tree-sit from the air.

He said Premier Lara Giddings and Prime Minister Julia Gillard were dishonouring their own agreement by allowing Forestry Tasmania to log the coupes.

“Their word is being clear-felled by what I judge is illegal logging. If this agreement has any legal force then this logging is illegal,” Senator Brown said.

“I didn’t write this agreement, I didn’t have anything to do with it, but the Prime Minister did and the Premier did. The Prime Minister wrote to me and said these forests had been placed in informal reserves.”

Forestry Tasmania’s general manager of operations Steve Whitely said the coupe was one of 13 being logged inside the assessment area that was identified by independent schedulers as necessary for supply contracts.

He described the protest as frustrating and pointless given that forestry operations would shut down for about a month from tomorrow.

“Forestry Tasmania needs to keep operating and we need to select some coupes that are suitable to meet our customers’ needs and we’re doing that while there’s a verification process going on,” Mr Whitely said.

Ms Kerr said that she would not be deterred by the Christmas shutdown. “I’ll stay up here and keep an eye on things and be here ready when they get back,” she said.