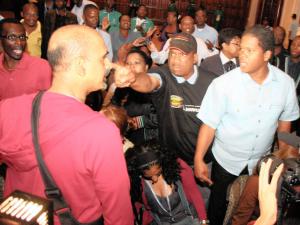 By Kyle Venktess and Sapa

A climate change meeting to be addressed by President Jacob Zuma took an unruly turn at the Durban City Hall on Thursday when people carrying posters reading “Zuma stand with the poor, not the USA” were attacked by supporters of the president.

The aim of the meeting was for Zuma to give feedback on a consultation session with civil society organisations on the sidelines of the 17th Conference of the Parties of the UN Framework Convention on Climate Change (COP17).

Another group, who sang Zuma songs, grabbed the demonstrators and pushed them out of the hall.

One demonstrator, Rehad Desai, was hit and kicked after falling down. Some of those who carried posters were taken away by the police.

Desai said he was disappointed that his “comrades” had attacked him. “What happened to us today is very bad. It means that we can’t raise placards as a way of voicing our views. I was kicked in the face.”

Bobby Peek, of groundWork, an environmental organisation, blamed the police for the chaos.

Some of those who carried posters were taken away by the police, but it was unclear if they had been arrested.

“Please calm down. We don’t need chaos,” he said.

“It was uncalled for. What we saw today happens where there is no democracy. It is important that if you have a different view, you raise it with respect,” he said.

According to groundWork activists, they were attacked by “people dressed in green COP17 volunteer tracksuits”.

Siziwe Khanyile said they had attended the meeting to deliver a message to Zuma.

“We can’t all get an opportunity to speak to the president, which is why we used banners. Violence broke out when peaceful civil society demonstrators silently held up signs asking Zuma to stand with Africa. Demonstrators were roughed up and some had to flee the hall,” she said.

She said they were “abused, kicked out, robbed, and manhandled by Zuma supporters disguised as COP17 volunteers”.