David Ortega, Tohono O’odham native elder, suffered a stroke after being pepper sprayed by police and is now at the hospital. SCOTTSDALE, Arizona— 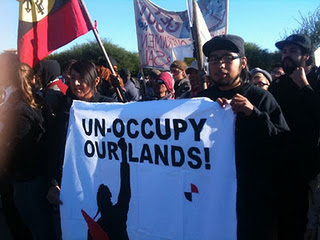 Tohono O’odham David Ortega, veteran and elder, suffered a stroke today after being pepper sprayed by police at the ALEC protest. Ortega was peacefully protesting when police pepper sprayed a delegation of O’odham. He was taken to a nearby hospital. Alex Soto, O’odham youth shown on the right in the photo, was also pepper sprayed in the face.

Tohono O’odham protesters at the ALEC protest in Scottsdale, Ariz., in the Phoenix Valley, were peaceful and apparently singled out because police viewed them as key to the protest. Ofelia Rivas, Tohono O’odham and founder of O’odham VOICE against the Wall, said, “There is a lot of unnecessary police brutality.”

O’odham from Tohono O’odham, Salt River and Gila River have joined Navajos resisting relocation from Big Mountain on the Navajo Nation at the protest to battle the corporate influences underway of legislators and lobbyists.

Native American protesters are battling mining interests, the theft of water and land rights, abuse by US Border Patrol agents, desecration of sacred lands and the militarization of the border. On the Navajo Nation, Peabody Coal, responsible for orchestrating the so-called Navajo Hopi land dispute, continues to poison the land, water and air with coal mining for power plants. On the US/Mexico border, the US Border Patrol continues to beat and abuse O’odham and other Indigenous Peoples in their homelands. Uranium mining continues to target the Grand Canyon and Indian lands, while radioactive tailings from the Cold War remain.

In Arizona, corporate profiteers continue to push copper, coal and uranium mining, devastating the land, water and air, and resulting in widespread health problems for the people.

The US/Mexico border wall, and its non-functioning spy towers, has been a source of corporate profiteering for US corporations including Boeing, who entered into a contract with the Israeli Apartheid defense contractor Elbit Systems for the border wall and security systems.

The US is now asking Tohono O’odham to approve new US spy towers on their lands, after the last billion dollar boondoggle of the US, failed spy towers on the Arizona border which did not function. Further, as the media fans racism which aids border profiteers, G4S based in London, profiteers from transportation contracts for the Wackenhut buses transporting detained migrants from the Arizona border.

Decades of mining has poisoned the water throughout Indian country in Arizona, while many American Indians do not have any safe water to drink. Meanwhile, corporate interests scheme behind closed doors to seize Indian water rights, working in collusion with the US and state governments.

Background: The American Legislative Exchange Council (ALEC) begins their meeting today in Scottsdale, in the Phoenix Valley, for their annual State and National Policy Summit from November 30-December 2 2011. Indigenous Peoples, including O’odham, are part of the movement to shut down ALEC. Protesters in the ALEC march were reported pepper sprayed by police and two arrests made.

“ALEC itself is a tool for hundreds of corporations to use for the sole purpose of obtaining access to thousands of legislators and then exploiting that access to pass profit-making legislation. ALEC works like a think tank, devising legislation that benefits the corporate elite at the cost of the masses and then putting that model legislation in the hands of legislators along with gifts and incentives to urge their passing and now more than 200 of ALEC’s model bills have become actual laws throughout the country over the past year,” protest organizers said in a statement. “The links between corporate greed, state oppression, and you have never been clearer. This website is dedicated to the rising resistance against ALEC, their planned summit, and all corporate greed that would serve to perpetuate state oppression in already impoverished communities on already occupied land.”