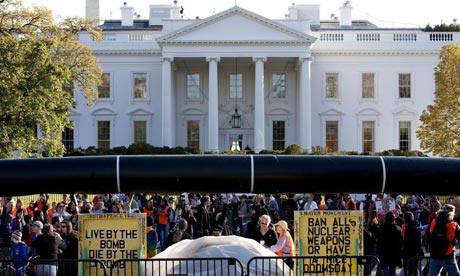 Demonstrators carry a giant mock pipeline while calling for the cancellation of the Keystone XL pipeline during a rally in front of the White House. Photograph: Joshua Roberts/REUTERS

Environmentalists opposed to TransCanada Corp.’s Keystone XL pipeline encircled the White House, urging President Barack Obama to reject the project even if it means overruling his own State Department.

“It will be the real test of his character, you know: Is he going to stand with people’s power, or oil power?” Bill McKibben, organizer of the demonstration, said in an interview after the rally in Washington yesterday whose sponsors said it drew as many as 12,000 people.

Also covered by other mainstream media such as here