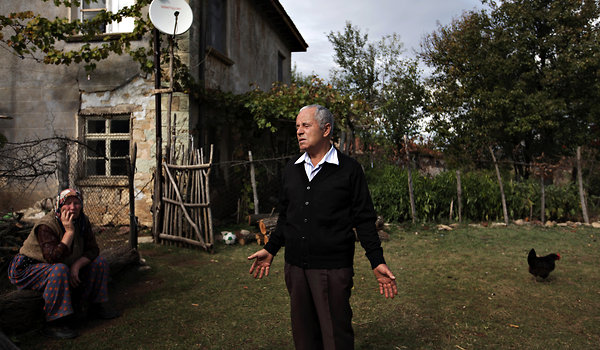 Yusuf Emurla, 70, who escaped from Bulgaria to Turkey during the Communist days but comes back to his birthplace next to Ada Tepe every summer. “I grew up here, and every tree is dear to me,” he said. “But I have no idea why the Bulgarian government so easily destroys its own country.” Credit: Boryana Katsarova for the International Herald Tribune

The New York Times published an excellent expose by Dimiter Kenarov last week on rural opponents of a proposed open pit gold mine near Krumovgrad, Bulgaria, along the border with Greece. The industrial project, spurred by the rising worldwide demand for gold, is driven by—big surprise—a Canadian mining company. Dundee Precious Metals, and its Bulgarian subsidiary, Balkan Mineral & Mining, are now well into the process of forcing through the needed permits to begin the destruction. What follows are excerpts from the article:

…Balkan Mineral & Mining has repeatedly assured local residents that there would be no serious adverse effects to their health and the regional environment. And the central government is convinced that the mine would bring much-needed wealth to the area and the country as a whole. But most of the people here remain unconvinced and openly hostile toward any large-scale mining.

Unlike other areas in the Rhodope Mountains, which were heavily mined and industrialized under Communism and today bear the scars of environmental destruction, the landscape remains surprisingly pristine.

Much of the Krumovgrad region is in Natura 2000, the network of environmentally sensitive areas protected by the European Union. Of the 191 bird species in Bulgaria, 46 percent are found here, as well as half of the country’s species of reptiles, amphibians and mammals…”

“The mine will destroy our livelihood,” Ahmed Ahmed, a 64-year-old shepherd from the village of Dazhdovnik, said as his flock grazed near the site of the proposed mine.

His neighbor Shukria Mehmed concurred. “We just don’t need the mine,” she said, her clothes and hands soiled brown from picking tobacco. “We already have all that we need.”

The proposed mining site, atop a prominent hill, Ada Tepe, lies just outside Krumovgrad, a town of about 6,000 people. It is close to more than a dozen other settlements with adjoining agricultural fields and pastures, some no more than a stone’s throw from the area expected to become the open pit…

Potential pollution of the limited water resources in the area is the principal cause for concern among residents. According to interviews with several farmers, the extensive drilling during exploration has dried up local wells or muddied the water. Danko Zhelev, the exploration manager of Balkan Mineral & Mining and the head geologist of the project, attributes this situation to the hot and exceedingly dry weather of recent years.

The climate, with hot Mediterranean summers and mild winters, is indeed at the root of the quandary facing the region. The Krumovitsa River, which supplies a large portion of the water for drinking and irrigation in Krumovgrad, runs dry in the summer months, exposing its gravel bed. The mining project, which would produce gold concentrate through a process of crushing, grinding and flotation, calls for the use of large quantities of water that could further strain resources.

And the planned waste facility — where as much as 14.6 million tons of waste rock and 7.2 million tons of tailings would be deposited over the expected nine-year life of the mine — would be about 150 steps from the river.

“Our real treasure is not gold but water,” said Usein Usein, 50, the proprietor of a popular coffee shop in Krumovgrad, where the proposed mine is a constant topic of discussion. “How am I going to look at my grandchildren when I know I’ve poisoned their lives?”…

Gergana Chilingirova, an ecologist in Krumovgrad, points out that there are high levels of toxic arsenic in the ore. “There is a real danger that the drinking water of the region would be contaminated,” she said. The Krumovitsa River is part of the Maritza River Basin, which flows through Turkey and Greece and empties into the Aegean Sea, creating potential pollution in other countries.

“The fears that something would happen to the environment are unsubstantiated,” said Asen Turdiev, deputy regional governor and a fervent supporter of the mining development. “A large number of experts have given a green light to the project, so I have no worries.”