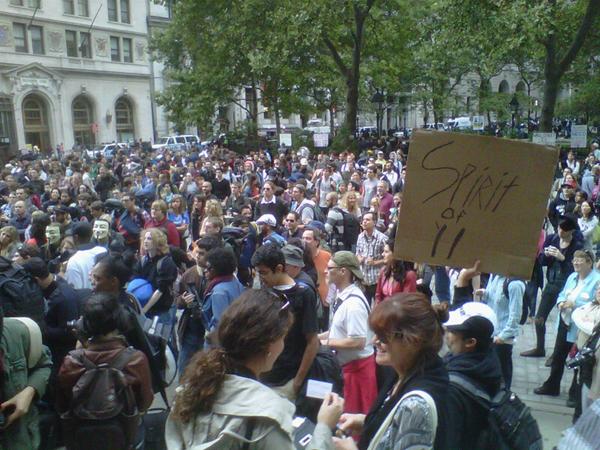 Earlier this month, we posted news of the call to occupy Wall Street, in the spirit of Tahrir Square (and other recent popular uprisings: Spain, Greece, London…) Yesterday, the day after New York Mayor Bloomberg publicly expressed his fear of riots in the US, the occupation began. Several thousand people camped out last night on Wall St.

While dialogue continues on whether there will be a central demand, debates also surface about the value of these symbolic actions. You can keep up with news from the streets, or order folks a pizza, through info available at OccupyWallSt.org.

While we here at the EF! Newswire tend to feel lucky that we have thus far generally been spared the obsessive comment-posting internet nerds, we did get a few choice ones in our original post about the Wall St. effort telling us that we must not understand the “Earth First! ethos” and that confronting Wall Street had nothing to do with bringing down industrial civilization. We laughed, then posted some snide comment back.

In any case, we hope strength and success to those taking to the streets in NYC. And if they’re still at it when the next issue of the EF! Journal come out in a few weeks, perhaps we can send a box up to spark some discussion on strategy and tactics for bringing down the system.

By the way, your donations and subscriptions can help that happen... So, kick in to support our fundraising drive, eh?!