TUCSON, AZ.— Under the guise of border security, Sen. John McCain (R-Ariz.) offered an amendment to the Department of Homeland Security appropriations bill today that would grant border-enforcement agencies free rein on federal lands within 300 miles of the US-Mexico border. After criticism from colleagues in his own party that the 300-mile limit went far beyond the scope of border-enforcement activities, McCain scaled it back to 100 miles, and the amendment was added to the bill.

“Politicians are playing games with important border-security legislation at the expense of laws that protect clean air, water and endangered species,” said Randy Serraglio, a conservation advocate at the Center for Biological Diversity. “This amendment is unnecessary, unwanted and threatens significant harm to the wildlife, natural landscapes and people of the border region.” 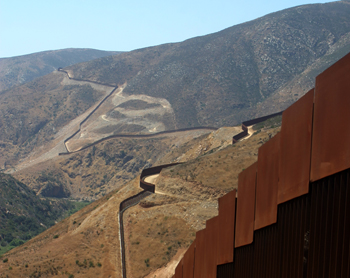 Border fences like this one in the Otay Mountain wilderness in California can prevent animal populations from interbreeding and dispersing. Photo: Scott Nicol

A study conducted at The University of Texas at Austin earlier this year has shown some of the greatest vulnerability of wildlife in the borderlands.

“Our study is the first comprehensive analysis of threats to species across the entire U.S.-Mexico border,” says Jesse Lasky, a graduate student in the laboratory of Tim Keitt, associate professor of integrative biology. “The scale at which these fences stretch across the landscape is large, so it’s important for us to also have a large-scale view of their effects across the continent.” 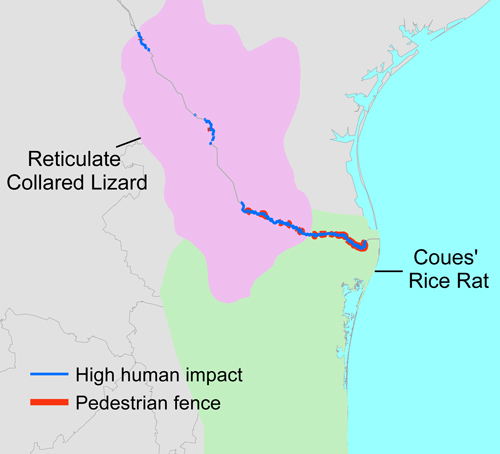 Coues' Rice Rat and Reticulated Collared Lizard are both Texas threatened species. Coue's Rice Rat occurs in Texas at the edge of its range and has most of its border range occupied by areas of high human impact and pedestrian fences. Reticulated Collared Lizards were identified as a species that would be at risk if extensive barriers were built across its range in the future. Image: Jesse Lasky

Among the species at risk include four species listed as threatened globally or by both the US and Mexico, and another 23 with small range sizes. The animals include the Arroyo toad, the California red-legged frog and the jaguarundi.

The study by Lasky, Keitt and coauthor Walter Jetz, an associate professor in the Department of Ecology and Evolutionary Biology at Yale University, and appeared earlier this year in the online the journal Diversity and Distributions.