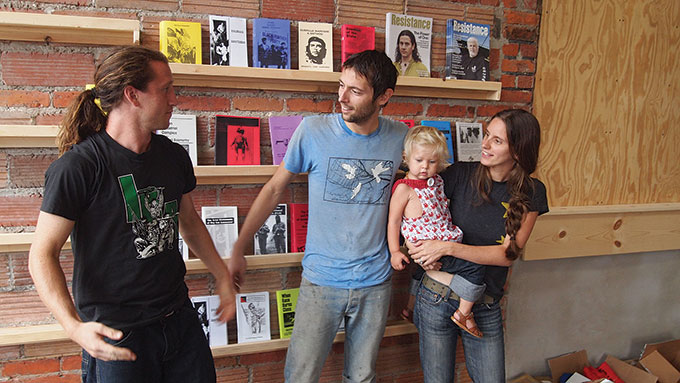 Burning Books opened its doors last week, coinciding with the 40th anniversary of the Attica prison uprising. Leslie Pickering is a co-owner of the space, along with two others. He is also a former spokesman for the Earth Liberation Front who appears in the recent documentary film on the ELF, If A Tree Falls. The new bookstore will be hosting several screenings of the film later this month.

According to the cover story in Buffalo’s weekly paper, ArtVoice: “This is not the group’s first effort to open a reading room for radicals. Several years ago, all three were active in a group called Arissa, which was similarly committed to educating audiences about radical movements.

“When the not-for-profit Massachusetts Avenue Project took over a former library on Grant Street, Arissa offered to staff the building with volunteers and stock it with reading material so that it could remain an educational resource for the community. A Buffalo News reporter asked questions about Pickering’s past relationship with the Earth Liberation Front… and MAP’s new executive director spooked and pulled the plug on the project.”

In 2008, they bought 420 Connecticut Street at a city auction. Today it is a venue open to revolutionaries and activists. Contact info for the space is listed in the Earth First! Journal directory. Stop by and visit ’em sometime!