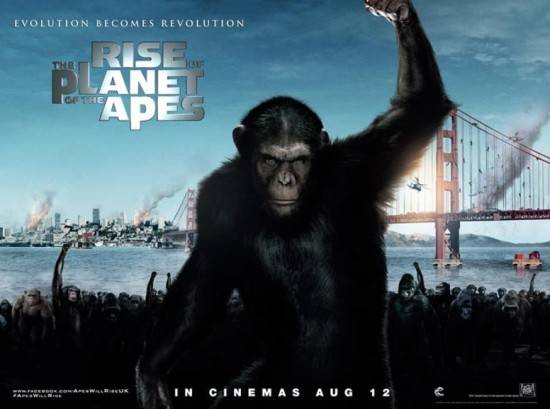 Thanks to a reel operator in a Scandinavian theater who kindly filmed the Rise of the Planet of the Apes for bootleg, the Earth First! Journal collective has had the opportunity to review the newest prequel in the film series.

While the characters and quality of plot are typical of Hollywood hogwash, some underlying themes and concepts of the film standout as worthy of discussion and excitement. Biotech, human supremacy, animal sentience, apes liberating themselves from labs, zoos, and pet-hood and defeating a fully armed riot squad of police, make for an ALF wet dream. Its a fantastical piece full of all the things the slightly misanthropic animal lover will love. PETA has come out and endorsed the film for its use of CGI apes, rather than living captive entertainment slaves, and its presentation of apes as sentient. I would guess a good bit of the endorsement is also subtle nod to the beautiful scenes of animals taking revenge on their human overlords.

Set in contemporary Bay Area, California, the film opens with an introduction to the world of capitalist biotech research on primates. The lead human character, Charles Rodman, who we as an audience are compelled to identify with, is a molecular researcher and vivisectionist searching for a cure to Alzheimers.  In the process of genetic tinkering, Rodman creates ALZ-112 and then ALZ-113, two gene therapy elixirs which consequently increase the cognitive function of apes beyond human cognitive development. As might be expected of capitalist ventures into genetic modification, ALZ-113 reacts adversely on humans. It promises, as is foreshadowed in the film, to infect and annihilate human existence.

The films central ape character, Caesar, is “saved” by Rodman and another primate handler, who nevertheless murders Caesar’s mother when an early test group fails to receive funding. Caesar is raised like a middle class child in the suburbs, learns to write, play chess, and draw.

Over several years Caesar becomes aware that he is a pet and his species are enslaved in laboratories and zoos by humans. He becomes aggressive and is ordered by the courts to a rather hellish dungeon “sanctuary,” awaiting extermination. There he organizes chimpanzees, orangutangs, and gorillas to break free. Of course, in another strange nod to biotechnology, Caesar provides them with ALZ-113, which pushes them to more anthropomorphic qualities of speech, upright bipedal postures, and apparently concepts of self liberation. 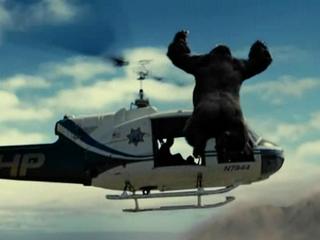 The apes rampage, de-arrest comrades, tear down power-lines, destroy cop cars and helicopters, and flee for a free-state in the Redwood forest.

The film left me wondering where all the human species traitors are? If such a scenario actually took place, die hard animal liberationists would be in the streets with their primate friends smashing police stations, biotech labs, spray painting ALF on the Golden Gate bridge, and working on solidarity campaigns raising funds for guns for the ape insurrection—perhaps the next film in the series. I look forward to the Rise of the Planet of the Apes II featuring Walter Bond.

[Editors Note: I work for a group actively fighting the Scripps Reasearch Institute, a biotechnology company which coincidentally tests on apes, engages in Alzheimer’s research, is trying to expand its facilities onto an endangered forest in South Florida, and works with Phillip Morris and Kraft Foods.]