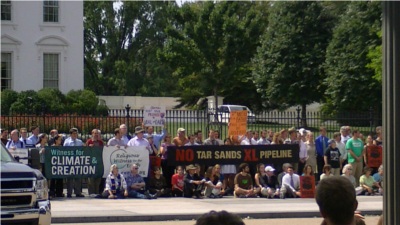 August 29th was the 6th anniversary of the landfall of Hurricane Katrina in New Orleans, and barely a day after the departure of Hurricane Irene from DC. Delayed by the storm and hearing nature’s message about climate change from Irene, 143 people were arrested in front of the White House in the opener to the second week of tar sands protests.
This was the largest tar sands protest to date in the two-week series of protests running from August 20 until September 3ed. It was the first of these to involve triple-digit mass arrest totals-and over double the size of most of last week’s protests.

The Saturday protest as the storm approached was changed to a rally no including civil disobediance, and the Sunday protest had to be cancelled. On Monday, however, the tar sands pipeline opponents delivered on their promise of a much larger protest than any yet seen in front of the White House on this issue.

The Keystone XL Pipeline would connect the tar sands oil mining operations in Canada to refineries in Texas. A pipeline to the Canadian coast has been blocked, preventing exports to places like China, but some of the oil gets to the US by existing smaller pipelines. The much larger and dedicated Keystone XL pipeline would create the large export market the destructive tar sands mining project has so far lacked, bringing about a massive expansion of the mining.

The State Department as approved the environmental impact statement of this pipeline but still has to decide if it is in the “national interest.” A decision on that question is expected by December. Since tar sands oil can be anywhere(depending on process and surface vs deep) from 17% to several times as carbon intensive as normal oil, this is in truth a decision about whether or not global climate catastrophe is in the national interest!

Hey Obama-Irene has spoken, did you get her message?