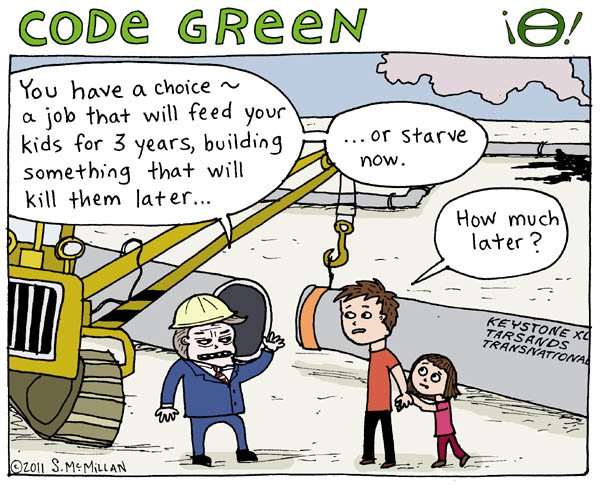 The following text was posted on McMillan’s site accompanying the Wage Slave Dilemma comic: “The capitalist system sets up a false jobs vs. environment conflict, that serves the system on both sides. If people’s land wasn’t stolen and destroyed, they wouldn’t be able to be forced into a position of dependency and into the labor force in the first place.

Here’s an interesting article by a labor leader about why he opposes the Tar Sands pipeline. Though he’s very much part of the establishment unions, he seems to be honestly grappling with the false conflict between labor and the environment that has been set up by the ruling class. I don’t see things the same way he does (like his advocacy of “green jobs” within a continued framework of capitalism, or participating in a protest of orchestrated arrests that appeals to Obama), but he makes some good points and, I think, eloquently expresses the real anguish of the worker trapped in a bind—of balancing the immediate need to feed one’s family while realizing that the only options we’re offered for doing so are destroying their future.”