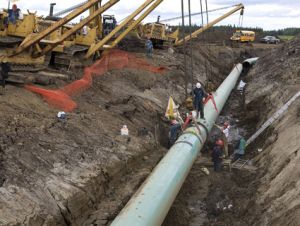 The U.S. State Department released its final Environmental Impact Statement for the Keystone XL Pipeline to bring fossil fuel from the Canadian oil sands to the U.S.

State Department official Kerri-Ann Jones said the report concludes there would be “no significant impacts to most resources along the proposed pipeline corridor,” according to a transcript of a press conference.

“However, with that statement, there are a lot of follow-on descriptions as to steps that the applicant is required to take and has agreed to take in terms of complying with all applicable laws and regulations,” said Jones, assistant secretary for State Department’s Oceans and International Environmental and Scientific Affairs.

TransCanada , the developer of the 1,700-mile pipeline to take crude oil from Alberta to delivery points in Oklahoma and Texas, said the State Department has essentially “reaffirmed the environmental integrity of the project.”

However, environmental groups continued their opposition to the project.

“The document still fails to address the key concerns for landowners and wildlife,” said Tim Lyon, senior vice president of the National Wildlife Federation. “It is almost certain to be scrutinized in other venues, including a probable legal challenge. This only escalates the controversy in a process that is far from over.” See the State Department’s document

The State Department will now hold public meetings in cities along the pipeline’s proposed route and in Washington D.C. and gather views of several other federal agencies before making a final decision.

The Keystone XL Pipeline has drawn more 300 arrests in protests near the White House this past week, including Nancy Romer of the Brooklyn Food Coalition.

“I’m worried about climate change,” Romer said in an interview with MarketWatch, after being asked why she took part in demonstrations. By routing fuel from the massive Canadian oil sands projects, the project will ultimately create a “huge amount of carbon and it’s non-sustainable,” she said.

Romer wrote a detailed blog about her 53 hours in jail after her arrest on Aug. 20. She said she endured chilling temperatures in a lock-up with 20 other women with no beds or chairs. They used the wrappers from sandwiches in an attempt to keep warm.

“We all felt it was worth it to step out and declare our opposition to policies that are killing our planet,” she said in her blog.