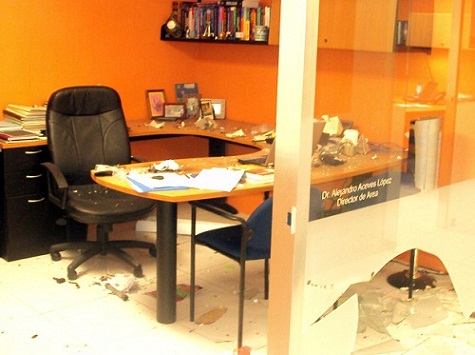 The same group who took credit for anti-technology bombing in April, which news sources in Mexico reported exploding at Universidad Politécnica in Valle de Mexico, has claimed more attacks.

According to Time Magazine, “An anti-technology group… was responsible for a package bomb that injured two university professors just outside Mexico City, a state prosecutor said Tuesday [August 9, 2011]. Mexico’s Attorney General’s Office announced that a suspicious envelope presumbly containing explosives was found at Mexico’s National Polytechnical Institute on Tuesday, though it didn’t detonate. The office has opened investigations into both incidents.”

The Time article claims the groups is calling itself ‘Individuals Tending to Savagery’, although a translator’s note on the anarchist blog War On Society, which posted a translation of the communique, uses the name ‘Individualists Tending Towards the Wild’ and explains: “The group’s name, Individualidades tendiendo a lo Salvaje [ITS]… more literally means ‘individualities,’ and salvaje more literally means ‘savage’… having more of the connotations of barbarous undomesticated wildness than pure pristine wilderness, and without as much racist connotation as the English ‘savage’ has.”

As with the April communique, ITS is again a bit wordy, with plenty of footnotes, ala Ted Kaczynski. Here are some excerpts: “But what’s wrong with creating solar energy through modified nanoparticles? some will say. ITS answer: When these modified viruses affect the way we develop as the result of a nanobacteriological war, by some laboratory error, or by the explosion of nanocontamination that compromises the air, food, transportation, water, in short, the entire world, then they will realize, all those who defend nanotechnology and cannot find an apparent threat, that it was a grave mistake to leave it to grow at their leisure.”

“Among the projects at the mentioned university campus are the Center for Business Development and Transference of Technology, CEDETEC, which is part of a futuristic philosophy called Mission 2015, which is committed to developing research and technology relevant to nanobioindustrial progress for the country in different areas… CEDETEC is a place where the efforts of companies, the State, and the university merge, and which aims to promote job creation, attraction of capital, and growth of technology companies and to increase value for the academy.”

“…It is logical we will continue with these acts, and other scientists and the rest of technoswillology [the original ‘tecnobazofia’ more seamlessly combines two words meaning ‘technology’ and ‘pigswill’ or ‘hogwash’ – transl.] must pay the consequences of their actions…”

Posted in News and tagged CEDETEC, Individualists Tending Towards the Wild, ITS, Kaczynski, nanotech particles, nanotechnology.