From the Sea Shepherd Conservation Society 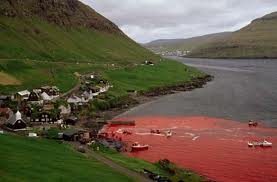 Blood of pilot whale slaughter in the Faeroe Islands' "Grindadráp"

Commentary by Captain Paul Watson, August 11, 2011—The Faeroese government and media have claimed that they are an open society and that debate and dialogue are valued and welcome in the Faeroe Islands. Towards that end, we decided to make a public presentation in Torshavn to explain why Sea Shepherd is defending the whales.

First we approached Nordic House, a cultural institution, where we were politely told we were not welcome to speak. Next, we made a reservation for a conference room at the Torshavn Hotel. With the reservation confirmed, we issued a notice of the event to take place on Saturday, August 13. But just the next day, the hotel cancelled the reservation on the advice of a source they would not reveal. The movie theatre literally slammed the door in our faces when the same proposal was requested. So much for a welcome and an open dialogue in the Faeroes.

We were told that other people had been welcome to discuss the “grind” in the Faeroes because they were open to understanding the culture and traditions of the Faeroese that lie behind the continuation of the slaughter of the whales. We were told we are not welcome because we will not compromise. In other words, we had to understand and accept the slaughter in order to discuss it, and that we will not do.

It is our position that culture and tradition must never be a justification for cruelty and slaughter. When it comes to killing, we draw the line on compromise.

Since we cannot make an in-person presentation to the local citizens, the only manner that we can explain our position to the people of the Faeroes is to post this open letter on our website and social forums allowing those Faeroese who wish to understand why Sea Shepherd does what we do the opportunity to read about it.

We would have welcomed questions and an open exchange of views but this opportunity has been denied to us by circumstances beyond our control. However, if are given permission to do so, we still may dock our ship in Torshavn in Saturday, August 13 to invite people onboard for discussion with the Captain and crew.

In the meantime, for anyone in the Faeroes who wants to know why we are here, the below letter is our explanation.

One EF! Journal Editor’s Note: I recognize the importance of protecting long-finned pilot whales on a planet who’s ocean is in a constant decline of biodiversity. But I do not entirely share the positions and perspectives of Sea Shepherd’s Captain Paul Watson. Watson’s letter states “This is not about killing a cow, a sheep, or a pig raised for human consumption. This is akin to killing a mountain gorilla, a chimpanzee, or an orangutan. It is simply ethically and morally wrong… how can civilized people anywhere respect such a barbaric tradition and barbarism as exactly what it is—an affront to decency, an insult to humanity, and a disgrace to civilization.”

Unfortunately, There is no reason to believe that domestication, agriculture and civilization present a path away from the slaughter of the wild. Embracing industrial agriculture and the values of civilization as a whole for the sake of protecting pilot whales is not a compromise we should be willing to make. Why is it that Watson is willing to openly advocate for a decline in human population (and align himself with anti-immigrant racists), but unwilling to contest the legitimacy of civilization, which is at the root of the problem?