Tim DeChristopher was sentenced to 2 years in prison today at the Salt Lake City federal courthouse. He was taken immediately into custody, being denied the typical 3 weeks afforded to put his affairs in order and say goodbye to his friends and family. 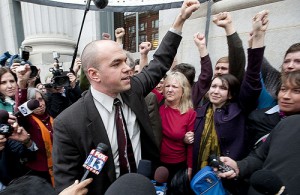 Federal prosecutors asked for Tim to receive an extra harsh prison sentence in an effort to intimidate the movement that stands with him. They hoped that by condemning him to years behind bars, they would “make an example out of him” and deter all of us from taking meaningful action. But Tim is already an example. He’s an example of the courageous acts that people across our movements are taking to fight for justice and a liveable future. We support Tim by continuing to organize. Our response to this sentence is an affirmation: we will not be intimidated.  What’s your response?

The government’s statement is clear. Tim has been sentenced to 2 years as punishment for his politics; for the uncompromising content of his speeches and organizing in the two years since his act of civil disobedience protected 150,000 acres of land. Ironically, his principled views and motivations behind his actions he took were never allowed to enter a courtroom, due to their “irrelevance.” In a highly political trial, the jury was unjustly stripped of its right to be their community’s conscience and manipulated into making a political prisoner of a peaceful and concerned young man.

Author and activist Terry Tempest Williams said, “To think that a young man in an act of conscience might [do any amount of time] in a federal prison for raising a paddle in an already illegal sale of oil and gas leases, compared to the CEO of BP or the financial wizards on Wall Street who have pocketed millions of dollars at our expense  – and who will never step into a court of law to even get their hands slapped, let alone go to jail, is an assault on democracy.”

She’s right. But we have the power to turn this assault on democracy into a battle for democracy. Today the Salt Lake City community is expressing both their love and their outrage.

Fossil fuel lobbyists knew that Tim would be indicted the evening before it was officially filed, Jury members explained that they were intimidated throughout the process. The fossil fuel industry should not control our justice system.

Unless we decide to respond accordingly, as Tim serves his time, the real criminals — the fossil fuel industry wrecking our planet and our communities — will continue to run free, unaccountable for the countless oil spills, asthma attacks, contaminated waterways, cancer clusters, and carbon seeping into the air we breathe every day. If the justice system is intent on prosecuting the people protecting rather than pillaging the planet, we must confront the real criminals ourselves. With our heads held high, we continue to stand on the moral high-ground – and will do what’s right, despite the consequences. We know that mother nature’s consequences of inaction are far harsher than any imposed by a court system.

But we are not isolated individuals. We come together with our communities as groups of empowered agents of change who know our system is broken and does not represent us. Our communities represent us, and our vision of a resilient, just, and sustainable world that we are fighting for.

Tim’s sentence is a call to action.

For those of us who’ve been following his story fervently, our hearts were broken today. It is a sad moment. But we now have an opportunity and a responsibility to act on those feelings of hurt and outrage. For Tim’s sacrifice to truly mean something, for the spark it ignites in each of us to burn, we all must take action.

2011 has already become a year of peaceful uprisings around the country. As Tim once said, we were never promised that it would be easy. We know it will take courage, sacrifice and a willingness to sustain our resistance in our fight for real Justice. Tim has taken a step and we will take the next thousand.

Here are a few upcoming action opportunities to join:

We’ll see you on the streets,