Today, Tim DeChristopher was sentenced to 2 years in prison and taken away from the courthouse without goodbyes or the option to self-report. In court, Tim said “You can put me in prison but it will not deter my future of civil disobedience and it won’t deter others who are willing to fight to defend a livable future.” 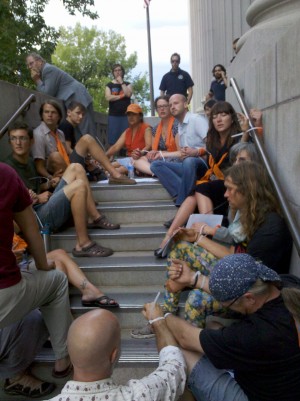 Outside the Courthouse, hundreds of supporters had gathered from the Salt Lake City community, singing, chanting, and speaking out as they bore witness to the sentencing. Immediately after the bang of the gavel Ashely Anderson and Ashley Sanders were hauled out of the courtroom for loudly rallying people inside saying, “this court has proven itself incapable of justice. So the people will take it back – it is now our court!” foreshadowing the civil disobedience to come outside. As Henia Belalia left the Courthouse, she made an official statement declaring, “If there was ever a day in history to take action, this is it.” And people took action. Peaceful Uprising activists did a sit-in to blockade the 2 front entrances of the Federal Courthouse, to tell the world “its ours” and emphasize that if Tim was going to jail, they were too, giving meaning to the slogan “we are all Bidder 70.” Taking their lead, members of the community began to join the blockade to show their love and outrage. 26 people were arrested.

A mother who joined the blockade was with her three children during the time of arrest, and said in tears “I need you to see this, its for your future.” Those participating in the sit-in chose to emphasize their point that business as usual is unacceptable by moving to blockade a major intersection in front of the courthouse during rush hour. As supporters continued to sing and support those who locked down, Tim DeChristopher was quickly rushed out the side door in chains and loaded into a police van. We can only hope he felt our support, and that that support is carried to all people of conscience who do what is right for people and the planet.

Today a true crime was committed in every federal courthouse in the United States. Why is Tim now in prison for protecting our future, while corporate CEOs walk free with millions of dollars for destroying it? We recognized today that our justice system has failed us. It, like our economy and other branches of government, are controlled by the fossil fuel industry. And today we affirm that we stand with millions actively taking it back. Please see our official response to the sentencing for action opportunities and links to all of the remarkable actions that are being taken around the country.

Act! The movement is with you.