UPDATE: Day 4 of the West Virginia tree sit on Coal River Mountain. Reports from the direct action group RAMPS say the new canopy residents are staying dry despite the rain and collecting rainwater with their tarp. Both sitters are very glad that the rain has brought some slightly cooler weather. A message this evening from the sitters:  “Our first visit from a cop! He was nice. Not as cute as the baby bears though.” Apparently he was “just making small talk. Wanted to see us. Asked if we were in it for the long haul.” 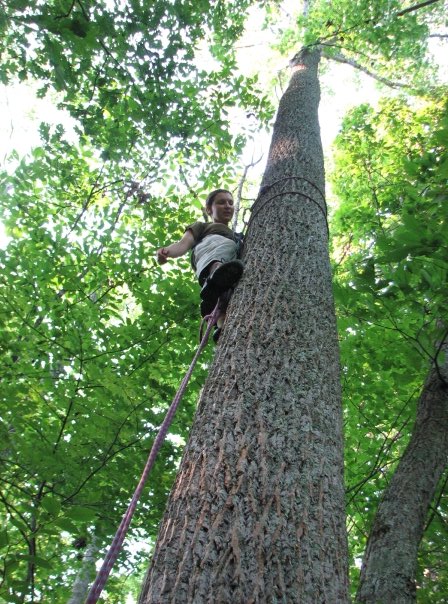 [T]he fabric of these ancient and diverse forests is being torn apart. There is no way that I can begin to detail the comprehensive destruction that surface mining and mountaintop removal wreak on the forest ecosystem of the southern Appalachian mountains. Valley fills choke ephemeral, intermittent, and other headwater streams, eliminating their function in providing organic matter downstream, increasing the sediment load, and causing flooding. Sulfuric acid released during mining leaches heavy metals that poison aquatic life and humans. The forests that are clear-cut before a mountaintop is destroyed cannot begin to grow back on a reclaimed site; the geology, hydrology, topography, substrate, and chemistry of a strip mined site cannot be manipulated to resemble those of the original forest, making reclamation an empty promise. The soils will take a century to recover, and the mountain itself will be gone forever…

I feel, with the keen urgency of extinction, that Alpha Natural Resources cannot be allowed to tear apart Coal River Mountain and allow all those living below it to suffer for their profits. Legal resistance to strip mining has been failing for decades; we can’t allow ourselves to be gulled into believing that we should confine ourselves mildly to sanctioned channels for change while those who profit from exploitation set the terms. We need to throw everything we can into the gears of big coal, costing them as much money and shame as possible. To this end, I am going to sit about fifty feet up in a tree for as long as I can.

If you haven’t begun already, I invite you to join us in the fight.