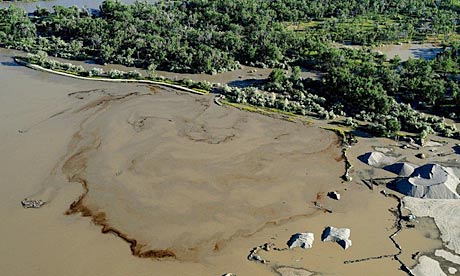 Hundreds of barrels of crude oil spilled into Montana’s Yellowstone River after an ExxonMobil pipeline beneath the riverbed ruptured, sending a plume 25 miles downstream and forcing temporary evacuations, officials said.

The break near Billings in south-central Montana fouled the riverbank and forced municipalities and irrigation districts Saturday to close intakes.

The river has no dams on its way to its confluence with the Missouri River just across the Montana border in North Dakota. It was unclear how far the plume might travel.

ExxonMobil spokeswoman Pam Malek said the pipe leaked an estimated 750 to 1,000 barrels of oil for about a half-hour before it was shut down. Other Exxon officials had estimated up to 42,000 gallons of crude oil escaped.

Duane Winslow, Yellowstone County director of disaster and emergency services, said the plume was dissipating as it moved downstream. “We’re just kind of waiting for it to move on down while Exxon is trying to figure out how to corral this monster,” Winslow said.

Cleanup crews deployed booms and absorbent material as the plume moved downstream at an estimated 5 to 7 mph.