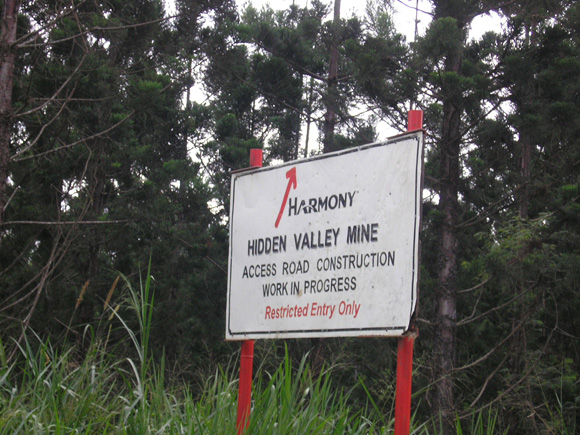 June 4 – Riots have reportedly broken out against the Australian based mining company, Newcrest Mining, and Harmony Gold of South Africa in the Bulolo District of Morobe Province, Papua New Guinea. The violence has been sparked by the long outstanding grievances of the communities down stream of the Hidden Valley mine over mining pollution and sediments which affect the lives of thousands of people who say they do not benefit one way or another from the operations of some of the worlds biggest mining companies.

Communities have, since 2009, been raising issues regarding toxic sediment build up causing damage to food gardens, washing away footbridges, die back of vegetation, the death of aquatic organisms, health and hygiene complications in communities, loss of navigation on water routes, loss of clean water and recreational areas, loss of economical land and hunting sites, destruction of secret (sacred) sites and destruction of a primary income source – aluvial gold.

Earlier last month, Papua New Guinea Mining Minister, John Pundari, tried to address the community grievances but this proved to be in vain as the meeting understanding sign by parties including Hidden Valley Joint Venture (HVJV), ‘a two face mining company’ comprising Newcrest and Harmony, was not implemented and HVJV and Papua New Guinea’s Mineral Resources Authority (MRA) failed to implement the understanding.

Local communities say they served 24 hours notice on MRA to address their concerns on June 2nd but by 4pm local time on June 3rd there was no answer.

While the Watut River communities grievances were not addressed, HVJV staff silently went on the communities land to collect water samples for analysis.

Earlier this year, the community based organization, the Union of Watut River Communities, attempted to enter into the Mining Lease and HVJV MoU covered area with its own chemist to collect samples but permission was rejected by the mining companies.

Yesterday a vehicle belonging to the Newcrest and Harmony was smashed by frustrated communities. Two Royal Police Constabulary officers who were providing security and private escorts to the mining companies have also being accused by local people.

Local people say more riots are expected today between the government officers, mining company and the PNG police force on one side with the rural mining affected communities on the other.

They also say police this morning sent a warning that they would burn villages houses if there is any more trouble.

A road blockade is expected to start today.