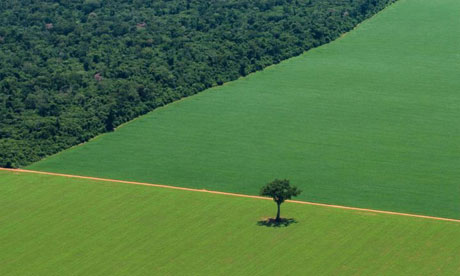 On Wednesday 8 June, the first bags of certified “responsible” soy will be issued to companies such as Ahold and FrieslandCampina, during a ceremony in Rotterdam. This voluntary certification scheme is an initiative of the World Wildlife Fund and will be marketed by the Round Table on Responsible Soy (RTRS). One certificate represents one tonne of soy products: beans, flour or oil. [1]

However, the new label has repeatedly been dismissed by hundreds of organisations as “greenwashing”. Networks including Friends of the Earth International, Global Forest Coalition and Food & Water Watch wrote a letter in March this year to warn supermarkets not to cooperate with this misleading label. 23,000 consumers signed an email petition with a similar message. [2]

“This soylabel is a typical example of consumer deceit”, says Nina Holland of Corporate Europe Observatory. “Importing soy for industrial livestock farming in the Netherlands is inherently unsustainable. Apart from that the soy is produced with intensive use of agrotoxins. Even genetically manipulated soy that is resistant to the herbicide Roundup can be called ‘responsible’ according to this new label”, she adds.

The criteria for responsible soy are very weak. It is allowed to spray pesticides from airplanes close to homes and there are no clear targets for a reduction of pesticide use. Deforestation is not ruled out – land that is still covered in forest today can be used to produce ‘responsible’ soy tomorrow.

The label offers no solution to the struggle for land that is being fought in countries like Paraguay between smallholder farmers and the agri-industry.

The new label is financed by the Dutch government and the industry. They have enormous financial interests in the 9 million tonnes of soy that are imported into the Netherlands each year. But countries like France, Sweden, Norway and Germany are moving in the opposite direction; the demand for GMO-free products is growing and companies are switching to GMO-free feed for production of meat, eggs and dairy. “What is remarkable is that the launching of this soy label in Rotterdam is organised by Schuttelaar & Partners, the same public relations agency that organised the introduction into the Netherlands of RoundupReady soy on behalf of the Monsanto company back in 1996.

[1] The Round Table for Responsible Soy Association (RTRS) is a collection of corporations that are involved in the production, trade and processing of soy and includes Unilever, Ahold, Cargill and Monsanto. The Dutch government supports the label through the IDH, Initiative for Sustainable Trade.

[2] The criticism is summarized in a short animation film: http://bit.ly/gifsoja-animatie Last year 230 farmers-, environmental – and development organisations from Latin-America and Europe criticised the greenwashing of toxic soy. On top of that a coalition of organisations recently asked the European supermarket chains to stop deceiving consumers with false labels. The umbrella organisation of German nature conservation groups (DNR) asked the World Wildlife Fund to step out of the RTRS and to ‘stop supporting a failed agricultural model’ More information about the problems with soy and the ‘responsible’ certification as well as an analysis of the RTRS criteria can be found on : www.toxicsoy.org

[3] As the monthly Milieudefensie (Friends of the Earth NL) Magazine reported in 1998, Monsanto hired Schuttelaar & Partners in order to prevent curious enquiries emerging during the introduction of Roundup-Ready soy in The Netherlands back in 1996. The Dutch MVO Marketing Board organised a promotional visit to the home base of Monsanto in St Louis (USA) at the time. Several employees of Schuttelaar & Partners later on confirmed that there was no evidence to support the claim that GM soy is environmentally friendly, although that message was emphasised in the PR campaign.