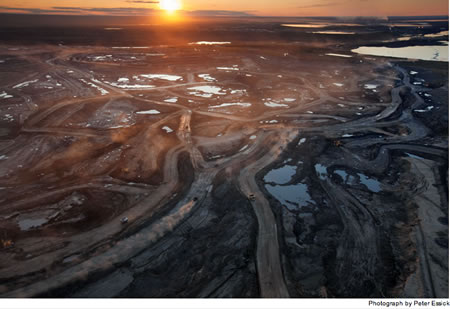 This used to be an ancient forrest

The federal government has acknowledged that it deliberately excluded data indicating a 20 per cent increase in annual pollution from Canada’s oilsands industry in 2009 from a recent 567-page report on climate change that it was required to submit to the United Nations.

The numbers, uncovered by Postmedia News, were left out of the report, a national inventory on Canada’s greenhouse gas pollution. It revealed a six per cent drop in annual emissions for the entire economy from 2008 to 2009, but does not directly show the extent of pollution from the oilsands production, which is greater than the greenhouse gas emissions of all the cars driven on Canadian roads.

The data also indicated that emissions per barrel of oil produced by the sector is increasing, despite claims made by the industry in an advertising campaign.

“The oilsands remain Canada’s fastest-growing source of greenhouse gas pollution, and they’re the subject of a huge amount of attention and scrutiny in Canada and internationally,” said Clare Demerse, director of climate change at the Pembina Institute, an Alberta-based environmental research group. “So it’s very disappointing to see Environment Canada publish a 500-page report that leaves out these critical numbers — especially when last year’s edition included them.”

Environment Canada provided the oilsands numbers in response to questions from Postmedia News about why it had omitted the information from its report after publishing more detailed data in previous years. A department spokesman explained that “some” of the information was still available in the latest report, which still meets Canada’s reporting obligations under the UN Framework Convention on Climate Change.

“The information is presented in this way to be consistent with UNFCCC reporting requirements, which are divided into broad, international sectors,” wrote Mark Johnson in an email.

He was not immediately able to answer questions about who made the decision in government to exclude the numbers from the oilsands or provide a detailed explanation about changes in emissions.