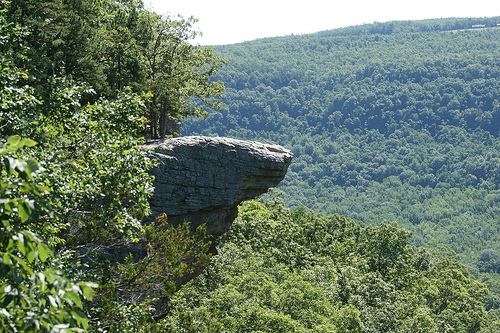 A view of a bluff in the 1.3 million acre Ozark National Forest

A federal lawsuit has been filed in Little Rock to prevent gas drilling under Greers Ferry Lake in north central Arkansas and in the Ozark National Forest in northwest Arkansas.

Those bringing the suit against three agencies of the United States government are a large group of environmental organizations and individuals from across north Arkansas. Their filing seeks to stop all drilling until studies have been conducted to comply with applicable environmental laws and to demonstrate that hydraulic fracturing of gas wells is not potentially harmful to the environment.

The complaint filed by the plaintiffs alleges that there is already gas drilling taking place in the Ozark National Forest, and that the number of wells is far in excess of estimates made in 2005 by the U.S. Bureau of Land Management, which is responsible for leasing gas on government-owned lands. These wells use the process of hydraulic fracturing, or “fracking,” which forces large volumes of water mixed with chemicals into underground formations to improve gas production.

The suit claims that the drilling activities will severely damage the National Forest, and that the effects of the “fracking” process upon surface and ground waters, the air and other parts of the environment are unknown and uncertain, and should be studied more thoroughly before being used in the Forest.

The plaintiffs allege that BLM and the U.S. Forest Service have violated the law by not having conducted environmental impact statements and Resource Management Plans for the Forest area as required by the Mineral Leasing Act, the National Forest Management Act and the National Environmental Policy Act.

Regarding Greers Ferry Lake, the suit states that the U.S. Army Corps of Engineers has issued licenses to natural gas companies to conduct seismic surveys at Greers Ferry Lake of underground formations beneath the lake and surrounding public lands that could yield natural gas. Three licenses for seismic surveys have been issued, and work on two of them have been completed. Work on the third license, issued in October, 2010, is currently underway, and the suit alleges that plaintiffs anticipate that drilling activity under the Lake will occur following completion of the seismic work.

The suit asks that the Federal Court enjoin Bureau of Land Management, the Forest Service and the Corps of Engineers from issuance of any additional gas leases until environmental impact statements and resource management plans have been completed and approved; and that BLM be ordered to halt any activities being conducted by any persons under any gas leases already issued by it in Arkansas.

The plaintiffs are represented by Richard H. Mays of the Mays & White law firm in Heber Springs.  Mays has been involved in a number of high-profile environmental cases in Arkansas.