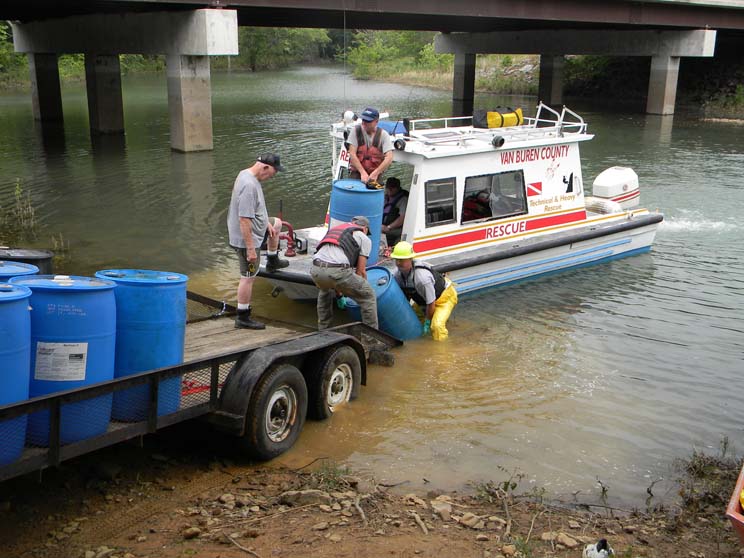 Nearly two dozen 55-gallon barrels with labels indicating they contain chemicals used in the natural gas well fracturing process have been pulled from Choctaw Creek near the Van Buren County community in Arkansas.

Clinton Mayor Roger Rorie said a man reported finding a barrel in the creek while fishing. The Van Buren County Rescue Squad began pulling barrels out of the water around 3 p.m. Thursday. By Friday afternoon, they had fished at least 20 barrels out of the creek.Arkansas Department of Environmental Quality spokeswoman Cecillea Pond-Mayo said some of the barrels were sealed and some were open.“We don’t know what their condition was like before they went into the water. That’s something we’re trying to track down now,” she said.

ADEQ will test samples of fluid from the barrels and water from the creek, Pond-Mayo said.

“We’re expediting that,” she said. “I don’t have an exact time or day when that’s coming back yet, but we’re trying to speed that up now.”

Choctaw Creek flows into Greers Ferry Lake, which provides the water supply for the county. The intake system for the Clinton Water Department system is about two miles from the location where some of the barrels were found.

Rorie said Friday the city’s water supply is safe to drink. Pond-Mayo and state Health Department spokesman Ed Barham said they had no information indicating the city’s drinking water could be unsafe.

The barrels carried labels from Total Separation Solutions LLC of Houston. Most of the barrels said “Sta Foam D,” though at least one was marked “Anchor Drilling Fluids USA, Inc.”

“We’re contacting the manufacturers and asking them questions about what exactly was inside the barrels and who they possibly could have been marketed or sold to,” Pond-Mayo said.

Officials from the ADEQ, the U.S. Army Corps of Engineers and local law enforcement agencies were at the scene Friday afternoon. Federal Environmental Protection Agency personnel also had been at the creek.

Yet to be determined is whether state or federal agencies will have jurisdiction over the investigation. Local officials said they did not know how the barrels ended up in the creek.

The barrels currently are in the possession of Haz-Matt Cleaning Inc.

In another incident involving gas and oil drilling operations in Van Buren County, a containment pond at a pad in Alread is leaking. 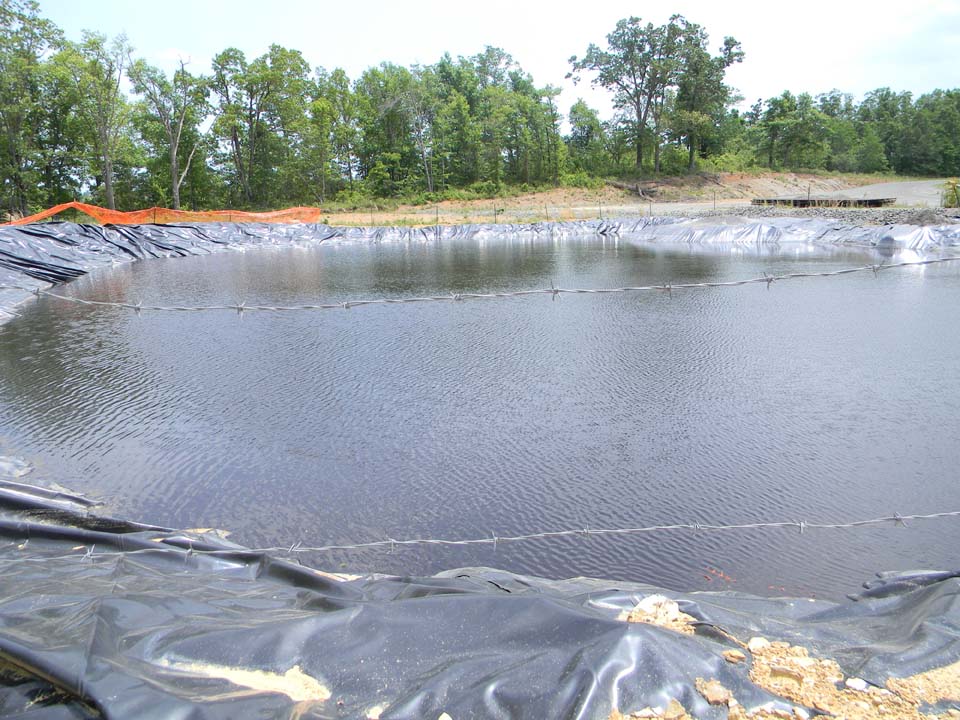 Hundreds of gallons of drilling fluids have leaked from this containment pond at Alread in Van Buren County onto the ground, and possibly into a nearby stream. (Anita Tucker photo)

The pond was built about two years ago and the plastic lining is full of holes. Hundreds of gallons of drilling fluids have leaked onto the ground and into a nearby stream.

The stream feeds into Wilson Creek, which is the headwater of South Fork River that flows into Greers Ferry Lake.

ADEQ inspector David Young said Thursday he did not believe the water had gotten into the creek yet, though he said he could not be sure because of the recent rainfall. He said he would likely take some water samples for testing.

Drilling fluids contain brine and other toxins. At the site Thursday, a dead crow lay by the leaked water and deer tracks were seen in the water and around the area.

The well pad is owned by Storm Cat Energy USA, a company that is currently in bankruptcy court in Colorado.

Neighbor Dennis Brummett said he noticed the leak a couple of months ago. After his complaints, about 6-8 inches of dirt was piled around the leak in an apparent attempt to contain it.

On Thursday, workers hired by Gossett Welding were at the site, trying to pump the leaked fluids back into the retention pond. One of the workers said he was planning to put a plastic liner on the ground where the water had leaked.

Young said that was not good enough. The pond, he said, needs to be drained and the pond filled in after cleanup. He said Storm Cat was written up for the pond two months ago.

He said the company would be written up again.

“This is a clear violation of state law,” Young said.