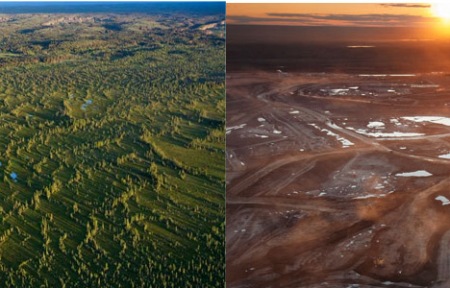 Tar Sands Before and After

A small delegation of First Nations members toured Strasbourg and Paris, France this week to meet with investors, French government and EU government with a specific message, “Canada is a developed country with “high” human rights standards yet the tar sands development is slow genocide for First Nations living within the extraction zone,” said Lionel Lepine, member of the Athabasca Chipewyan First Nation. “We are losing our culture, language and way of life which is protected by our treaty rights.”

The tour was organized by Friends of the Earth Europe, Friends of the Earth France and the Indigenous Environmental Network to address Tar Sands impacts on First Nations communities and the Fuel Quality Directive (FQD). The European Commission has yet to publish its proposal on the implementation of the greenhouse gas reduction target set in the Directive, and this legislation has been the focus of an aggressive lobby campaign by the Canadian Government. “The Governments of Alberta and Canada are trying to convince the EU to ignore the higher emissions from tar sands. However, independent peer reviewed studies, US Government and European Commission studies show that synthetic crude derived from tar sands leads to 23% higher greenhouse gas emissions than conventional fuels used in Europe. There is an urgent need to stop all development of unconventional oil and gas reserves and more broadly to end our dependency on fossil fuels” commented Juliette Renaud, Friends of the Earth France.

“We are calling for a higher standard on tar sands in the EU Fuel Quality Directive, including separate standards for tar sands open pit mining and in-situ mining.” said Heather Milton-Lightening of the Indigenous Environmental Network, ”We hope this forces other countries to stop developing, investing and importing Canadian tar sands oil.”

Eriel Deranger, one of the First Nation delegation members who attended the Total Fina AGM in Paris this past week with a clear message for shareholders, “Total should not be profiteering from development which is causing human rights violations in our traditional territories. We now face a lack of access to clean water, air and food in our homelands due to the massive pollution coming from the Canadian tar sands.”

Holly Rakotondralambo, from Madagascar, who was also part of this tour, concluded: “We hope that the example of Canadian tar sands serves to draw the consequences and not to repeat the same disaster in other countries, especially in Africa where the governance is very poor. Communities in Madagascar are not prepared to face the destructive impacts of Total’s project there and our government doesn’t have the capacity to regulate the activities of these oil companies.”