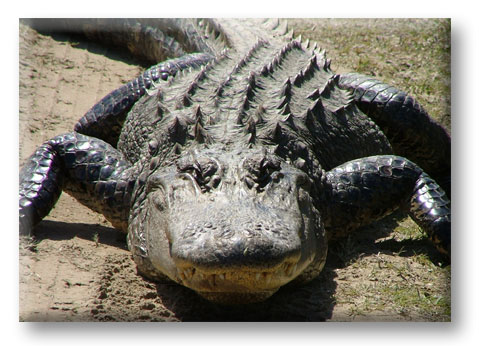 May 6 “Somewhere in Florida on May 1, a 14-foot alligator was liberated from his pit of despair where he was a caged tourist attraction. He was imprisoned in a shallow pool of stagnant green water, no pump, no food, unable to return to his home only yards away. Three baby alligators used as photo props were also freed. All four made it to the river as night fell. The next time the prison guard goes out on the river, we hope his former detainees will greet him appropriately. This liberation is dedicated to POW Walter Bond and all of our imprisoned comrades.  –The Resistance”.  From the Press Release: [ Historically, alligators were depleted from many parts of their range as a result of market hunting and loss of habitat, and 30 years ago many people believed their population would never recover. In 1967, the alligator was listed as an endangered species. The average lifespan for an alligator is 50 years. Alligator farming is a big and growing industry in Georgia, Florida, Texas and Louisiana. These states produce a combined annual total of some 45,000 alligator hides; the market for alligator meat is growing and approximately 300,000 pounds of meat is produced annually.

Alligators are only native to the United States and China. Alligators are generally timid towards humans and tend to walk or swim away if one approaches. This has led some people to the practice of approaching alligators and their nests in a manner that may provoke the animals into attacking. In the state of Florida , it is illegal to feed wild alligators at any time. If fed, the alligators will eventually lose their fear of humans and will learn to associate humans with food, thereby becoming a greater danger to people. Alligators, unlike the large crocodiles, do not immediately regard a human upon encounter as prey, but may still attack in self-defense if provoked. There were only nine fatal attacks in the U.S. throughout the 70s, 80s, and 90s. Alligators live in wetlands and this is the vital habitat that holds the key to their continued long-term survival. As apex predators , they help control the population of rodents and other animals that might overtax the marshland vegetation. Alligators are protective parents who will protect their young by attacking anything that comes too close or poses threats to baby alligators.]