The code name “Geronimo”, used during the US navy seals special operation that resulted in the reported death of Usama bin Laden, references the 19th-century Chiracahua Apache who spent his life fighting the encroachment of the states of Mexico and the US. into indigenous territory. 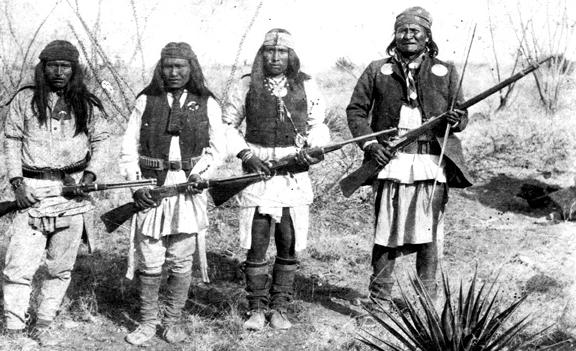 Despite valiant bravery against the well armed militarys’ of the two imperialist nations, Geronimo was eventually captured by US forces in 1886. He and other Apache captives were transported as prisoners to Fort Pickens, in Pensacola, Florida, and his family was sent to Fort Marion in St. Augustine, Florida. Geronimo died, unable to return to his homeland, in 1909.

Upon hearing the use of Geronimo’s name as the code word for Usama bin Laden, several Native American activist groups have voiced their outrage.

Time magazine reported the use of Geronimo’s name in the operation as follows:

The President sat stone-faced through much of the events. Several of his aides, however, were pacing. For long periods of time, nobody said a thing, as everyone waited for the next update. … So when word came that a helicopter had been grounded, a sign that the plan was already off course, the tension increased.

Minutes later, more word came over the transom. “Visual on Geronimo,” said a disembodied voice, using the agreed-upon code name for America’s most wanted enemy, Osama bin Laden. Word then came that Geronimo had been killed. Only when the last helicopter lifted off some minutes later did the President know that his forces had sustained no casualties.

According to CIA Director Leon Panetta:

Once those teams went into the compound, I can tell you that there was a time period of almost 20 or 25 minutes where we — you know, we really didn’t know just exactly what was going on. And there were some very tense moments as we were waiting for information. But finally, Adm. McRaven came back and said that he had picked up the word “Geronimo,” which was the code word that represented that they got bin Laden.

Comparing the legendary Apache leader to a terrorist and enemy of the United States was deeply insulting and did real damage to Native Americans of all ages, said Suzan Shown Harjo to the Associated Press. She is president of the Morning Star Institute, a Washington-based Native rights organization.

“It is shocking, really shocking, that this happened,” said Harjo, a member of the Cheyenne & Arapaho Tribes of Oklahoma.

“Our names are stolen and then we’re renamed in order to control us, frankly,” she told the Senate Indian Affairs Committee.

In a post in Indian Country Lise Baik King described the use of the name Geronimo as an attack on Native America. 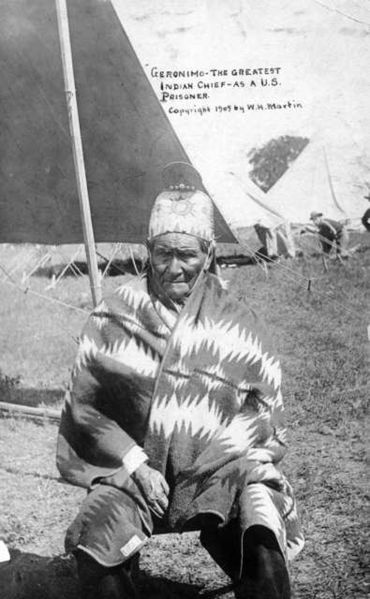 The “bin Laden is dead” news story will make thousands of impressions on the minds of people around the globe, and the name Geronimo will now be irrevocably linked with the world’s most reviled terrorist.

Potentially the most disturbing fact is what this says to American Indian children. It equates being Native American with being hated, an enemy to the world, and someone to be hunted down and killed, and re-casts one of their heroes into a villainous role.

But the story coming from the White House evolved by evening, with what appears to be a “re-tooling” of the message, which now states that the “mission” was code-named Geronimo.

The CNN White House blog featured a historic black and white photo of Geronimo and the headline, “Osama bin Laden codename “Geronimo”, for the duration of the afternoon at whitehouse.blogs.cnn.com. There is currently a post with the title “Osama bin Laden mission codename ‘Geronimo” (emphasis added) with a timestamp of 4:46 PM, though some commenters express outrage over the earlier title.

Tribal members from around the country are turning to social networking sites Facebook and Twitter as an outlet to express their anger and sadness at the unwelcome association. “This sucks,” said Harold Monteau, an attorney and tribal member from Rocky Boy, Montana, “A lot of people are angry about the obvious stereotypes it implies.”

“It’s another attempt to label Native Americans as terrorists,” said Paula Antoine from the Rosebud Sioux Tribe in South Dakota. Beaver North Cloud, a JemezPueblo tribal member from Albuquerque, New Mexico expressed her frustration, saying “Damn it!!!!! Why am I not surprised, yet so disappointed beyond words.”

And someone is already selling the stupid t-shirts: 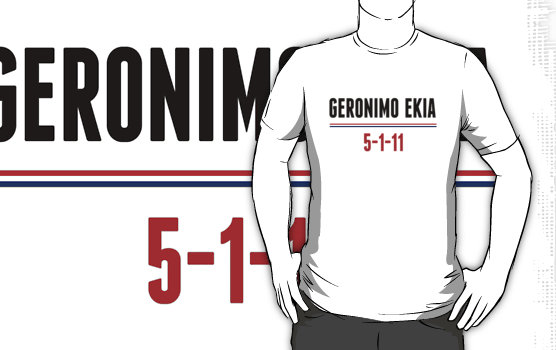