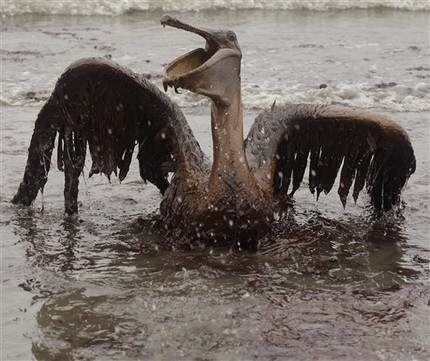 New Orleans: As the one-year anniversary of the Gulf Oil Spill disaster approaches, a new report has been released revealing the full impact on the region’s wildlife.

“A year after the April 20, 2010, explosion that caused the well to leak oil for months, the ultimate toll on people and wildlife is still not fully understood,” reads the report. “But one thing is clear: The number of birds, sea turtles, dolphins and other animals sickened or killed and tallied as part of the government’s official count represents a small fraction of the total animals harmed by this disastrous spill.” The government has reported the number of dead animals collected up to mid-February, but is not adding animals washing ashore this spring to the official tally because of ongoing criminal and civil investigations of the spill’s effects. Data from previous spills reveals that official mortality counts vastly underestimate true wildlife impacts, and that similar disasters harm wildlife for many years afterward. To obtain an estimate of the true wildlife effects of the spill, the Center added the number of animals the media reported washed up this spring to the official federal tallies, then multiplied that number by accepted scientific multiplication factors of true mortality counts. “The numbers of animals injured by the Gulf oil spill are staggering,” said Tierra Curry, a Center biologist. “No amount of mitigation money from BP could ever truly compensate for these horrendous losses.” Government counts of wildlife harmed by the spill include 1,146 sea turtles, 128 dolphins and whales, and 8,209 birds from 102 species. Since these counts were tabulated, media reports indicate at least 87 dead turtles have washed ashore and 390 more dolphins and whales have been stranded. Although oiled birds continue to be found, the government has stopped reporting numbers. Scientists estimate that at least five times as many turtles die as wash up on shore, meaning between 5,730 and 6,165 sea turtles have likely been harmed by the spill to date. All the sea turtle species in the Gulf are threatened or endangered. Scientists estimate that up to 50 times as many marine mammals are killed as wash ashore, indicating up to 26,000 may have been harmed so far. Finally, scientists estimate that from four to 11 times more birds perish than are collected, with 10 times the number collected being a common rule of thumb to estimate actual bird mortality. The BP disaster has likely harmed more than 82,000 birds. The spill also killed countless fish and invertebrates and pushed already-imperiled species closer to extinction. The spill occurred during peak spawning season for the severely overfished Atlantic bluefin tuna, currently being considered for Endangered Species Act protection. “The BP Deepwater Horizon disaster is a tragic lesson that politicians are refusing to learn. Catastrophic oil spills will continue to threaten our nation’s wildlife as long as our country continues to push for more and more offshore drilling,” said Curry. The Center for Biological Diversity is a national, nonprofit conservation organization with more than 320,000 members and online activists dedicated to the protection of endangered species and wild places. Contact Info: Tierra Curry, (928) 522-3681 Website : http://www.biologicaldiversity.org/
]]>
Posted in News.