By Kelly House, The Oregonian 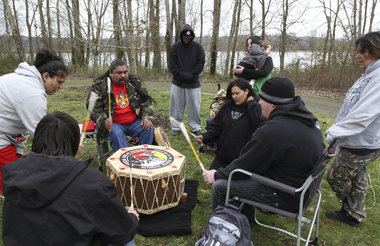 Members of the Grande Ronde and Warm Springs tribes gathered Sunday to sing and pray at Kelly Point Park in North Portland, chosen for its location at the confluence of the Willamette and Columbia rivers. The group of about 20 Native Americans and environmental activists were protesting the shipment of equipment upriver to support an oil project in Alberta, Canada.

An ancient Native American song emanated Sunday from the confluence of the Columbia and Willamette rivers.

Five drummers rhythmically pounded on a ceremonial drum while spectators passed around a seashell filled with smoking prayer leaves. “Ya-hey-ya-hey-ha,” lead drummer James Thinn chanted above the other singers, a traditional warrior’s chant.

The group’s enemies, Thinn said, are oil-factory modules moving up the Columbia River, across the states of Idaho and Montana, and into Canada’s oil sands, where Imperial Oil, a subsidiary of Exxon-Mobil, will assemble the 207 massive components into in an $8 billion oil operation. Imperial plans to strip mine tarlike bitumen from the ground and convert it into petroleum through a complicated, energy-consumptive process.

The Native American ceremony was an act of protest against the Imperial megaloads and all they represent – scarring of the landscape, the threat of pollution, destruction of salmon-rich rivers and the loss of a way of life. The gathering at Kelley Point Park was the first known organized protest of the megaloads in the Portland area, although protests have raged for months in Montana and Idaho, where tribal leaders held a similar event Sunday.

Although the trio is based in Eugene, they chose Portland for their protest because of the Columbia’s significance to Native American culture.

“It’s ancestral water of all different Chinook tribes,” Macy said. “We want to protect this river and help other people protect their indigenous homelands.
The tribes have treaty rights to fish the river, but tribe members say the salmon catch is dwindling every year. They blame flow-altering dams that allow boats to travel the river — including the barges that carry the oil-factory modules from Vancouver to Lewiston, Idaho, where they will be hauled by land to the Imperial operation amid Canada’s boreal forest.

“We don’t want this river to be used to help them destroy that forest,” Macy said.

Trish Weber, founder of All Against the Haul, said activists’ reasons for opposing the shipments are many.

Some worry the loads could veer off the narrow roads of U.S. 12 and fall into the river, affecting its natural flow for months. Others don’t want to see the factory built. Some are against the Keystone XL pipeline that would transport the petroleum from Canada to Texas. Many just don’t want the scenic highway turned into a shipping corridor for the Canadian oil industry.

But until now, the activism has been concentrated in Idaho and Montana.

“I think we’re going to start seeing a lot more action here in Oregon,” said Weber, who attended the protest.

The National Wildlife Federation has also begun pushing the oil sands issue in Oregon. Mike O’Leary, Oregon organizer for the federation, said the group is asking political leaders to join a campaign aimed at buying petroleum that isn’t sourced from the oil sands.

Still, O’Leary said, the controversy is “very much off the radar” for most Oregonians.

“If you ask the average Prius-driving American about the tar sands, they don’t know,” he said.

As barges carrying industrial cargo passed in the distance Sunday, about 20 protesters stood on the banks of the Columbia and Willamette rivers and started a new chant — this one a traditional Multnomah Chinook blessing. Each protester held a small mound of tobacco as an offering to the sacred waters.

“We’ve always been affected by what’s going on in this river,” Delia Sanchez said. “We’re trying to unite against this.”

See a video of the protest here.