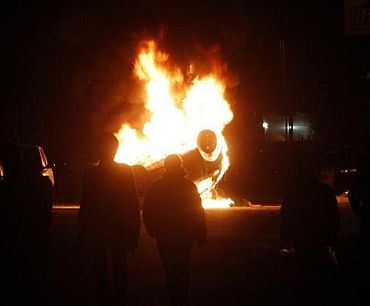 Photo: Ciro De Luca/Reuters
There have been mounting clashes between protesters and police in an area of Italy close to Mount Vesuvius. On Wednesday, November 3, protesters burnt a garbage truck and blockaded the entrance to the new garbage dump that has been at the center of the controversy. The following is an account of some of those clashes sent to the newswire by Earth First! Italy: 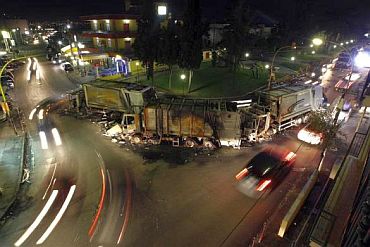 OK.
Protests in Terzigno are happening, because people are angry, and do not want more landfills. There are already huge landfills full of garbage, and there are many problems linked to the mafia and the people of the state that manage the landfills.

this is a statement from the Movement for Homeland Defense, Vesuvius area, and the Vesuvius Collective:
“Last night, the people of Boscoreale and Terzigno, already sorely tried by the quarry landfill Sari, confirmed the news of the opening of what will be Europe’s largest landfill: Cava Vitiello. At about 10:00pm, more than a thousand protesters blockaded the roundabout, via Panoramica, in Boscoreale. People attended the peaceful protest, and direct action started when slight damage to the police occurred from a few rocks that were thrown along with some firecrackers. Police responded to this mild intimidation for at least two hours, throwing tear gas repeatedly. A boy was wounded in one eye, probably by tear gas.
Because of the intensity of the smoke emanating, the crowd began to move away from the blockade, and into the side streets. At about two o’clock, after all the cameras had been turned off, at least eight police vans began to savagely attack the demonstrators. They were beating some of the protesters, especially women who were unable to flee immediately, jerking them around and causing wounds. One elderly person ended up in the hospital with a broken nose in spite of attempts of two people, a man and a woman, to protect him. The police were ruthless against the woman first, beating her savagely, and then against the man who tried to protect her. After being attacked, the two were also been detained in a cell and then released.
The protesters were followed to the bitter end, the cops threw stones, attacking people in private places such as houses and courtyards and even destroyed several cars. One car was on fire, we do not know by whom. This strong police repression is yet another act of intimidation; they did it just to intimidate, because they can not stop those who are trying desperately to defend their land, already battered by an emergency dump site for thirty years. Having lost hope in every institution, we call on all local communities far and wide to support us in what will be a long battle.