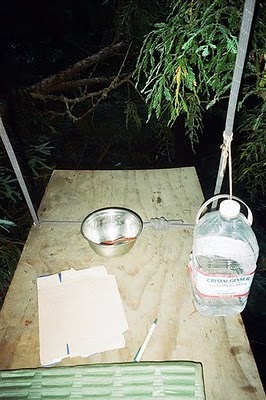 * Big moon, clear skies for the first time in over a month. Solo except for Alex in another tree up the hill. Green Diamond’s loggers have come very close to cutting the sentinel Redwoods that, once I’d witnessed first hand, captured my attention and called for action.

* Up until 4:30 am last night. Expected to wake up to the sound of saws and falling trees, but apparently someone called in and notified the company that tree-sitters had occupied the canopy in this grove slated for clear-cutting. The loggers can be heard over the hill but are a no-show here.

* Alex says they drove by and spotted him. I decide to pay him a visit. The forest is calm, cool and quiet as I walk through a forest that is soon to be no more. Fresh stumps can be seen a little ways down the hill from Alex’s tree. Full moon, a large bird of prey sleeps, perched atop a towering dead Redwood. Two large stick nests have been built below in huge gnarled branches. This sun bleached remnant of the once extensive ancient forest dwarfs all other trees as far as the eye can see.

* Early morning. Two deer come crashing up through the woods from the valley. They act scared and loudly cry out in a way that few humans have heard, or even know they can. The deer appear to know where they are going, following a well used animal trail that traverses the ridge next to me. Alex says that people from the company definitely know he’s there and walked all around the tree he’s in. I’m already rationing water and food in case they post security guards.

* I woke up to the sound of saws and debated whether to eat first or try to swing over to the next large tree and tie it to the one I am in. Alex yells down to me that Green Diamond is cutting trees next to him. The possibility that the loggers will try to drop it right next to me troubles me. It’s branches interweave with the branches of the tree I’m in. I re-position my climb rope and lower myself a ways down, enough to get a good pendulum effect. The other tree is 25 or 30 ft. away. It’s over-topped by the tree I’m in and probably grows from the same roots. I push off from my tree and swing out into forest canopy space. I grab a narrow live branch and pull myself the rest of the way over. Whew! Glad it went well on the first try. I tied my climbing rope to it and then went a short ways to the top of the tree, a sort of platform of contorted branches that stretch out to reach the rays of sun light. I could sleep there if I had to.

* I traverse back over and climb down to the platform/plank. Just as I settle down again, I hear footsteps approach. Two guys with orange hard hats inspect a tree nearby. One has an orange sweatshirt too. I wait for them to look around and see me but they don’t. “Yoohoo!” I shout down in a girly voice, trying to be funny. They look around and still don’t see me. “Where are you?” the sweatshirt guy asks. “Up here” I reply. I tell them about the tree I just tied in as there are no warning signs on that one. “Whats your name?” the guy asks. “I’m not going to tell you my real name,” I bluntly reply. “You can call me Frank.” “Whatever…” says the guy below.

* The other guy is bigger and wears a dark shirt with classic tree faller suspenders. They begin discussing and gesturing with their arms about cutting the rest of the trees around me. I’m hoping they at least stay on the other side of the small, seasonal stream course right next to me. Then at least I will have kept a modest amount of riparian forest intact. A much bigger creek channel is just down the hill from me too, a tributary to Jacoby Creek.

* Working on the sit. A 2×8′ piece of plywood. I lashed the middle of it down to the thick branch it sits on so it won’t slide around anymore. The ends of the plank are tied up to other sturdy looking branches. It’s still sketchy, I can’t go out on half of it without it tipping like a seesaw.

* Before 8 am. Crunch crunch crunch… “Hey Frank!” It’s the guy in orange. I think he’s a forestry technician. “How’s it goin’ today bro?” he asks. “Could be better.” I say. “I’d rather be fishing.” He tells me they are about to cut the trees around me. He says they will aim them away from me and that he will be there to watch. Is this supposed to reassure me? “You can come down now and I’ll let you walk away.” Tells me he’s not surprised when I don’t take him up on it. The saw is going now. Can’t see the faller. My phone battery is almost dead, must save for emergencies. Saw stops. The faller pounds a wedge into the cut, TAP TAP TAP! and a tree top 30 ft away from me drops out of sight. SCREEEAK, BOOM! Now he’s cutting it up. They’re trying not to hit me but the danger is real. Might as well eat breakfast and work on the platform. Nervous, trying not to sweat too much, need to conserve water.

* They fell a bunch of trees next to me but the biggest ones that could hit me are still to go after lunch. The Faller, James, seems experienced… but it’s a gamble. Those on the ground can run if something goes wrong, I can’t. The recent accidental deaths of two loggers is on my mind. I can see the clear-cut now. I’m seriously wishing I had a video camera for this.

* They cut a big Redwood near me but left it’s neighbor, a Douglas Fir I have my eye on. It’s very tall. I think the forester said it will be the spar tree, meaning that workers would hook up a heavy cable to it to run their log-dragging cable system through this part of the cut. I’m glad they left it because it was the one I was most scared would hit me if cut down.

* A big one just shook the ground when it fell, the tree I’m in shuddered. It wooshed through the air for a long time before it hit. Wonder which one it was…

* The forestry tech tells to the faller that they will be going after the rest of the grove next time. The remaining forest is on the slope facing Jacoby Creek Valley and has many large 150 year old trees. Redwoods, Spruce, Cedar, Maples and Alders grow on this hillside. I’m on the ridge above it. I understand the gist of the conversation from 100 ft. up because I already saw indications of this plan in their documents. They will probably try within 3-5 years, after the regs allow another clear-cut to be done next to the last one. Maybe people can do something pro-active to save it.

* A slender Redwood tree gracefully spins as it falls out of the shadows of the forest and down the hill into the dusty, sunlit clear-cut. Sunlight suddenly floods it needles and then SMASH! Its top breaks off on impact, branches shattering when it hits the tangled wreckage already layering the ground.

* Fallers Rick and James head home for the day. FYC.

* They were unable to cut the trees downhill from me due to my tree-sit and the tricky lay of the land. I’m glad to still have a forest on the north side, the south side having been largely wiped out.