Global warming is changing the world. Droughts in the Horn of Africa, increased risks of forest fires in California and depleted fish populations for coastal nations are just three examples of events that ultimately cause people to flee their homes. Yet, seeking refuge abroad because of environmental factors is not considered a valid reason for being a refugee.

“Under international law, a refugee is defined as “someone who is unable or unwilling to return to their country of origin owing to a well-founded fear of being persecuted for reasons of race, religion, nationality, membership of a particular social group, or political opinion.” UNHCR

The official definition of a refugee is clear; climate change is not a factor to consider when someone applies for asylum in a country other than their own. But the reality is that those most vulnerable to other kinds of persecution are also or are going to be affected by environmental changes.

Cox’s Bazaar, Bangladesh, is the location of one of the world’s largest refugee camps, and is also a location prone to cyclones and flooding. As many as 900,000 people live in the camp and rainfall has increased year on year.

The interaction of issues that cause people to flee was highlighted recently by the UN High Commissioner for Refugees, Filippo Grandi. On a visit to Somali in November 2022 he pointed out:

“I fear that without more attention and much greater financing for prevention, adaptation, and development and governance support — tensions, frustrations, competition will grow and spark wider conflict, with deadly consequences — including displacement,” Filippo Grandi

Haoua Ali Beta’s personal story demonstrates the reality of Grandi’s fears. She left her home in Cameroon because she could no longer find sufficient water for the family’s cattle — the only livelihood her family had known for generations. The lack of resources led to competition and later conflict with a neighbouring group. Eventually, violence led to the deaths of 150 people and caused Haoua to flee for safety. She now lives in Guilmay refugee camp in neighbouring Chad, where the natural resources are also stretched too thin.

As is often the case, women are more at risk of harm than men. In research conducted at the end of 2020, women are significantly more negatively affected than men by life changes due to climate change. They may be left to care for family and agriculture whilst men search for work elsewhere, or they will be victims of exploitation or abuse if they search for work in more urban environments.

The direct actions of the West can not be underestimated when it comes to changes to natural resources. A shocking example is that of the Damen Group. The Damen Group is a Dutch shipbuilding and defence company that provides military vessels to West African countries.

Fishing off the West African coast has been made illegal for local communities, instead being undertaken by large, multinational companies.

The loss of both food to eat and income from working in the fishing industry has caused an estimated 2 million people to become internally displaced. An estimated 20% of those displaced will try or have attempted to travel to the EU.

The Damen Group has also provided vessels to Greece, including to the Coast Guard. The same boats that cause migration are used in illegal pushbacks.

It is also worth discussing the historic colonial impacts on the causes of climate change. A prime example is shrimp farming in Bangladesh. The development of farming practices was encouraged by The World Bank to promote much needed economic growth by selling to foreign countries, at the same time devastating the coastal environment.

In California, the increase in the frequency and intensity of forest fires has been attributed to climate change, but it is largely wealthy, white people who have the money to move out of risk areas. Similarly, after New Orleans was hit by Hurricane Katrina in 2005, black people did not have the same options for fleeing the city. Simplifying reasons for migration down to climate factors is ignoring the historical impact of colonial powers. 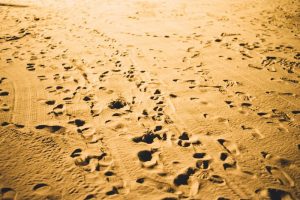 Photo by CHUTTERSNAP on Unsplash

Whilst it is clear that wealthy nations need to take drastic measures to support populations affected by climate change, expanding the definition of ‘refugee’ to include climate change may not be beneficial. Many people affected by changes in natural environments are internally displaced — they are forced to move within their own country.

The World Bank defines these people as ‘internal climate migrants’ but this term is problematic. The Third Pole — an organisation promoting sustainable development and water conservation in the Himalayan Region — disagrees.

“a migrant may be someone who relocates due to the pull of better livelihood options. But those displaced by climate change impacts have been pushed rather than pulled.” The Third Pole

Whilst redefining the legal term of ‘refugee’ to include climate change would recognise the responsibility of richer nations, it would not necessarily lead to change. Internally displaced people would not have access to this term, plus, someone claiming asylum would have to prove that climate change was the reason for their flight. Extreme poverty is also not covered by the definition of ‘refugee’ — so, how would one prove climate change when many factors collide to make someone need to leave their home?

The use of the term ‘migrant’ compared with ‘refugee’ is frequently problematic — terminology is frequently used by media and politicians to dehumanise and reduce the agency of those impacted, to talk about “climate refugees” rather than to them and frame them as “third world others” or, as one study puts it, “sinking strangers”.

The law, however, does provide some protections provided by human rights law in relation to non-refoulement. “Human rights law requires States to not send people back to countries, where climate change impacts expose them to life-threatening risks or cruel, inhuman or degrading treatment.” This may seem like a glimmer of hope, but if someone cannot be granted asylum on the basis of climate change, but also won’t be returned to their country, then what?

Despite wealthy western nations, who are largely avoiding any serious consequences of climate change, being reluctant to create a legal definition for “climate refugee”, there have been signs of hope. COP27 saw a step towards financial support, with various funds being established to pay for ‘responding to loss and damage’ — although actually how these funds will work is still not clear. Promises of funding to help adaptation to the effects of climate change were talked about at COP15, which took place in 2009, but just a quarter of the pledged $100 billion a year has been made available.

A schematic showing the regions where natural disasters will occur due to climate change. KVDP, CC BY-SA 3.0