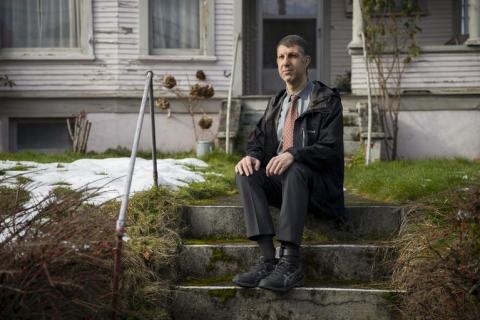 Long-time fugitive, Joseph Dibee pleaded guilty this year to helping burn down an Oregon horse meat factory in 1997, but he says the FBI is withholding evidence that could affect his soon-to-be-decided sentence

Joseph Dibee, a former international fugitive who pleaded guilty to the 1997 arson of a Central Oregon abattoir that sold wild horse meat to Europe, says the U.S. government is withholding information about his extradition. In an affidavit, he indicated a special agent with the Federal Bureau of Investigation lied when the agent said the U.S. government did not videotape the incident.

FBI Special Agent Timothy Suttles stated in his own sworn declaration, filed in federal court on July 14, that he was present in Havana to arrest Dibee but said there “were no videos taken by the United State Government.”

That differs significantly from a declaration Dibee, formerly associated with the Earth and Animal Liberation Fronts, filed in federal court last week stating that a representative with the U.S. government “was videotaping the rendition using a small silver Sony digital camera from the moment” they arrived.

“I have every reason to believe based on my experience and circumstances that what the agent said isn’t true,” said Matt Schindler, Dibee’s criminal defense attorney. “We’re just going to pop in there like it’s a weekend in Palm Springs and there’s no paperwork, no documentation, no communication, nothing.”

After more than a decade of eluding U.S. authorities by living in Syria and Russia, Dibee was detained in Cuba in August 2018. He told OPB in a 2021 interview that Cuban authorities tortured him during the roughly eight days he was in their custody. For the last two years, Dibee and his attorney Matt Schindler, have pressed for more information about the circumstances leading up to Dibee’s arrest and whether the FBI or other federal law enforcement agencies had a hand in his capture or in the treatment he’s alleged while in Cuba.

Dibee was first indicted, along with other supporters of the Earth Liberation Front and Animal Liberation Front, by a federal grand jury in 2006. Between 1995 and 2001, some affiliated with the two organizations were responsible for property destruction in five western states, totaling more than $45 million. The U.S. Department of Justice has called the arsons domestic terrorism and described the movement to Congress in 2004 as one of the greatest extremist threats facing the country.

In April, Dibee pleaded guilty to federal charges, including arson. He faced charges in Washington, Oregon and California.

In June, Dibee filed another discovery request, asking federal prosecutors, again, for communications between the U.S. government and Cuba about his detention and extradition, among other records. Dibee also asked for any video taken by U.S. government personnel in Havana.

“The government does not plan to produce additional information in response to this request,” writes Assistant U.S. Attorney Quinn Harrington in a July court filing. Harrington added that while the U.S State Department and the Department of Justice’s Office of International Affairs were involved in getting Dibee from Cuba, the communications were largely logistical and not central to the prosecution teams’ case against Dibee.

“[Dibee’s] speculation that the United States could have been aware of alleged mistreatment by Cuban authorities is nothing but conjecture and is not grounds to compel a fishing expedition,” Harrington stated. “The attached declaration shows that the FBI has no knowledge of any alleged mistreatment.”

In a sworn statement filed in July, Suttles stated that Dibee was evaluated in Havana by an FBI SWAT medic to determine whether he could fly “and to determine whether Mr. Dibee experienced any mistreatment while in custody.” He said other than Dibee’s own claims of torture he was “unaware of any mistreatment suffered by Mr. Dibee while in custody in Cuba.”

Suttles states that while he went to Havana to arrest Dibee, the U.S. government did not record any video.

“I do remember that there were Cuban Nationals with video cameras,” his declaration reads. “The FBI does not have access to the Cuban recordings.”

“During this entire time both the Americans and Cuban were videotaping,” Dibee stated in his court filing. “On numerous occasions, I witnessed Agent Suttles intentionally step out of the frame while the other American taped the proceedings or panned across the room.”

Dibee stated that after about 30 minutes, one of the men told him “‘we can do this the easy way or the hard way’ implying more torture … or drugs would be used if I resisted” getting onto the jet.

From Havana, the aircraft took Dibee directly to Portland. He was arraigned in federal court on Aug. 10, 2018.

A hearing is scheduled for Sept. 21 to determine whether the government has to turn over more information. Dibee’s sentencing is set for Nov. 1.

“You’re telling me they don’t have two and half minutes of video from picking up one of the most wanted fugitives on earth? Come on.”