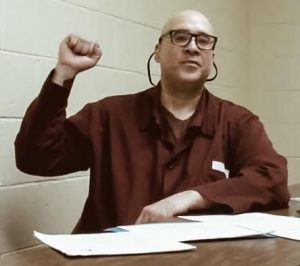 [Arroyo is a Prison Radio correspondent and state prisoner in Pennsylvania who has written extensively on prisoners’ rights and environmental justice.]

When one thinks about the climate crisis and incarceration, it is not often that we connect an immediate relation between the two. However, once you begin dissecting the crisis existing within the two subjects, you’ll quickly learn that not only do the two coincide, but ironically—in more ways than one—they contribute to each other’s unfortunate success.

More often than not, when we talk about climate crisis we think of what is relatable, like natural disasters, global warming, air pollution etc. No one is truly to blame for the silent and uncommon discussions on climate change and incarceration, other than the ones who are in charge of creating the crisis. At the same time, those people are silencing the very ones who pay the ultimate price. In this instance, we are talking about those who are incarcerated. Organization such as Families Against Mandatory Minimums (FAMM) have done an excellent job reporting on the horrors of the prison system. According to one of their reports in 2019, Pennsylvania imprisoned more than seven times the number of people than it did in the 1970s. Although this is a shocking statistic, it is not surprising. The U.S. imprisons more people than any other country in the world including China. It is also interesting to note that the United States of America is building prisons on toxic superfund sites across the country.

The corporate raiders are directly responsible for both the boom in the prison system and the mistreatment and destruction of Mother Earth. These so-called elites exploit, stock pile, harbor, and misuse, and control all of the natural resources. Did you know that the geographical location of about 600 U.S. prisons are intentionally built on or near toxic dump sites? Yes, you read that right! An easy band aid for the ‘toxic dump sites’ or as the corporate elites would call it, a superfund site.

A superfund site is defined by a law that provides money from the U.S. government to cleanup areas that are polluted, toxic, and inhabitable. What a strategy by the U.S. government to outright a norm and ignore the implications of declaring it “a superfund site” while having the prison industrial complex to construct, build, create, and stimulate the economy in economically depressed impoverished hinterland areas.

So how exactly do they address the issue at hand? You guessed it… prisons! Their solution is none other than to generate a wealth of revenue at the expense of about 2 million prisoners’ lives, all residing within three-mile radius of a superfund site. So what exactly do you assume happens when you bury the waste into our grounds and build a prison on top of a contaminated site like this?

A plethora of health conditions and cancers amongst the incarcerated. The average rate of cancer deaths in Schuylkill County, Pennsylvania is 190 per 100,000 people, which is about 50 more people compared to the average county in the United States. Many of those deaths happen in Black, Latino, poor, and incarcerated communities. It’s a vicious cycle—they pollute our air, then place a prison band aid on our polluted soils, in which the pollution then seeps into our water, that in turn poisons the incarcerated.

Again, I want to emphasize that the corporate raiders’ intentions have consistently persisted to affect the disproportionately, marginalized, and economically depressed areas comprised of Black, Latino/Hispanic and white minorities by building prisons on toxic waste lands and superfund sites to insidiously, slow-kill our progeny, family members, and generations via the pipeline industrial prison complex built on poisoned, anthracite-polluted lands. The corporate raider historical blueprint of exploitation, destruction, obliterating mankind’s and the earth’s natural resources in exchange for the almighty dollar has created many causalities in our communities.

Corporate destroyer’s greed-on-wheels philosophy is guided by their principle—Currency Rules Everything Around Me (C.R.E.A.M), at all costs. This has greatly contributed to the environmental catastrophes we see today. Planet earth, is at the red-level, indicating future global climate chaos, and catastrophic impending doom awaits the cull because of the corporate destroyers’ playbook to deplete earth’s resources with impunity.

Let’s also talk about the climate chaos surrounding climate change and how that affects the incarcerated. Are you aware that not every prison facility is equipped with air conditioning and proper ventilation? Increased temperatures (an impact of climate change) places a huge risk on the incarcerated. More specifically, those who are ill and or have chronic conditions, such as asthma are the most severely impacted. These prison facilities are also overcrowded and essentially overheated amplifying the brutal impact of climate chaos on those who are incarcerated. So how exactly do we help or push for change?

Unfortunately the only groups who have primarily pushed for change are the so-called dropouts, uneducated, poor, impoverished, imprisoned, neurodivergent, physically challenged, welfare and social security recipients, sex workers, LGBTQ generation, and tax payers. They are the inclusive ones who are ready and willing to sacrifice their material possessions and are willing to die for what they believe in.

Namely, to protect Mother Earth at all costs, regardless of the consequences, imprisonment, or death.

We need to educate and bring awareness. Nelson Mandela said “No one truly knows a nation until one has been inside its jails. A nation should not be judged by how it treats its highest citizens but its lowest ones.” The incarcerated population is one that is always left for last. Almost always in research they are not even accounted for. In times of climate crisis, the incarcerated are experiencing climate crises at an all-time high not only due to its structure, but the foundation in which the structure is built upon.

As a whole, we need to energize, strategize, mobilize, organize, and synergize to fight for our First Amendment rights, to stay alive.