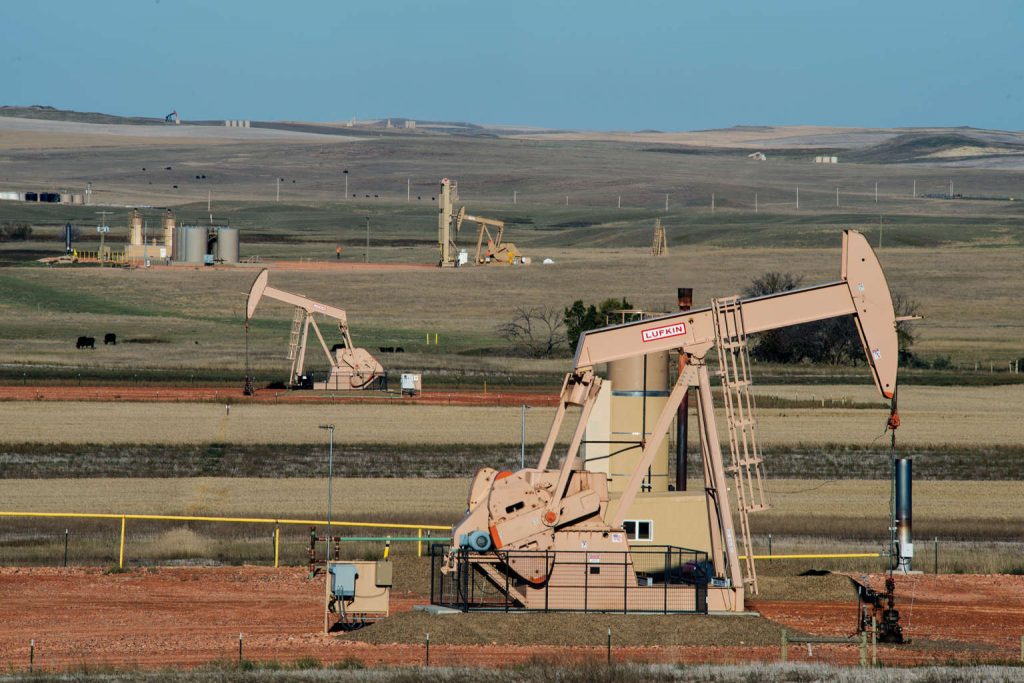 In direct violation of warnings by the International Energy Agency that new oil, gas and coal development should have ceased in 2021, and by UN Secretary General António Guterres that government support for fossil fuel production is “delusional,” the federal U.S. government closed out the second quarter of the year with thousands of acres of federal land on the auction block before oil and gas interests. In total, developers scooped up access to over 70,000 acres of lands held in public trust in Colorado, Montana, Nevada, New Mexico, North Dakota, Oklahoma and Wyoming for $22 million — which advocates say is a paltry sum when compared with the billions of dollars the climate crisis is estimated to cost annually in association with oil and gas extracted from federal lands.

The transaction comes at the tail end of a month in which one-third of the U.S. was urged to stay indoors amid record-breaking heat, and risks bringing more oil and gas production — a top contributor to greenhouse gas emissions and one of the most water-intensive industries — to some of the hottest and most water-stressed areas in the U.S.

But whether oil and gas will ultimately be pulled from the earth on those parcels to be burned is still far from settled, legal advocates told Truthout. Unlike other existential blows that came earlier the same week, such as the Supreme Court’s ruling on West Virginia v. EPA, which limited the agency’s authority to reduce greenhouse gas emissions from power plants, the decision to undergo sales on federal lands was fully within the administration’s powers to prevent, or delay, and remains in its power to reverse. According to the latest polling on the matter, the majority of Americans are opposed to drilling on federal lands.

Bids on the parcels occurred insipidly, the same morning the Supreme Court issued its decision on West Virginia v. EPA, on a website that state and federal government agencies contract with to handle sales. Anonymous bids jumped up every few minutes, a few dollars at a time, beginning at $2 per acre. “Bidder #426,” for instance, walked away with access to 320 acres in the Permian Basin at $1,901 per acre. The parcel is located on what was Mescalero Apache land prior to colonization, according to the Indigenous land mapping tool, Native Land. Other parcels were sold for the minimum bid of $2 per acre, such as 585 acres in Powder River County, Montana, on land formerly managed by the Northern Cheyenne and Arapaho tribes. Representatives of the Mescalero Apache, Northern Cheyenne and Arapaho tribal governments did not respond to requests for comment on the oil and gas lease sales as of press time.

In spite of predictions by industry representatives, Republican officials and mainstream news outlets that opening up federal land to more production would see a flood of bids and boost production to help ease gas prices, the sales appear to have been lackluster, Nicole Ghio, fossil fuels program manager at Friends of the Earth, told Truthout. “There’s this idea that these lease sales are going to generate this huge amount of [supply and] revenue, but they actually, relatively speaking, don’t.”

Thousands of acres the Bureau of Land Management (BLM) authorized to be put up for lease received no bids during the auction, which made them available for non-competitive purchase, said Melissa Hornbein, senior attorney at the Western Environmental Law Center. That means oil and gas developers who may have lurked on the edge of the auction can now step in and buy leases for even cheaper than $2 per acre. “The entire federal program is structured so as to maximize return for industry without accurately accounting for the environmental impact or the ways in which such practices monopolize federal public land that would otherwise be available for other purposes,” Hornbein told Truthout.

This summer, Seneca Johnson, a 20-year-old leader with Youth United for Climate Action (YUCCA), who is from the Muscogee Nation of Oklahoma but lives in New Mexico, has been coping with the worst fires she’s seen in her life. “The loss of the trees, the wildlife — we’re taught that they’re our relatives. And seeing these whole ecosystems and centuries of place and memory be burned away has been really hard,” she told Truthout, of witnessing the two worst fires in the state’s history happening simultaneously. Amid the smoke, and a visit by President Biden during which he did not once mention climate change in a briefing on the fires, the lease sales felt like a “slap in the face.” In New Mexico, climate change has “hit every sector of our life,” Johnson said. According to the United States Geological Survey, emissions from fossil fuels produced on federal lands account for one quarter of all greenhouse gas emissions in the United States.

To Johnson and legal advocates alike, the process leading up to the BLM sale has felt like it has all but occurred behind closed doors. The legal tug-of-war over the leasing moratorium began when over a dozen Republican attorneys general and oil majors sued the Biden administration in early 2021. A decision by a Louisiana judge to block the efforts to account for climate impacts in leasing sale decisions had the unexpected outcome of further delaying new leasing activity. In April, following an injunction by a federal judge, the Interior Department announced it would resume onshore oil and gas leases, noting, however, that it would reduce the number of overall parcels up for auction by 80 percent, and charge oil and gas developers a higher royalty rate.

The delay has also resulted, in part, from added rigor in the Department of Interior’s environmental review process, which, for the very first time, included an analysis of the “social cost” of greenhouse gas emissions associated with the sales. The social cost of carbon is a long-debated economic concept that enables policy makers to account for the cost of responding to the impacts of human-caused climate change, like treating related health conditions, declines in agricultural productivity and flooding caused by sea level rise. The Biden administration uses $51 per ton of carbon dioxide to estimate these costs, up from the Trump administration’s estimate of $1 to $7. In spite of the BLM’s use of the concept to analyze the impacts of its green-lighting the lease sale, which environmental groups praised, Ghio told Truthout, “it doesn’t appear that they actually took that into account in their decision making.”

The day before the lease sale, on June 29, BLM released a Finding of No Significant Impact (FONSI) for the leases in Wyoming (a standard government document explaining that a given project is found not to have significant environmental impacts and requires no further review). The agency determined that in spite of the proposed action potentially resulting in $357 million to $4 billion in social cost over the 30-year leases, BLM had undertaken those calculations “for informational purposes only,” and “ha[d] not determined to lease individual parcels, or not, based on greenhouse gas emissions.” According to the agency’s own analysis, earnings from the lease sales brought in dramatically less for the year than the cost of climate change they may contribute to causing. In Wyoming, for instance, the sale generated $12 million and is expected to cost society up to $137 million annually.

Beyond the sky-high numbers, Johnson says that no economic analysis can encapsulate the true gravity of continuing to produce fossil fuels. In New Mexico, according to her experience, this production has translated into more asthma, unnecessarily early deaths, wells on tribal land running dry and generations-long farmers being told they cannot grow. “It’s asking people to change their whole way of life. These things aren’t quantifiable.”

When questioned on lackluster consideration of its own calculation of the social cost of carbon and environmental justice impacts of its sale, a response to protests over the New Mexico lease sales stated: “The BLM received no comments during the public comment period from individuals or Tribal affiliates expressing [environmental justice] related concerns with the parcels to be offered.”

In New Mexico, activists including youth and Indigenous groups have had their hands full, amid the largest-ever wildfire that the U.S. Forest Service caused. “We are seeing our ancestral lands burn because of mismanagement by institutions that stole our lands from us from the very beginning,” Trenton DeVore, a 20-year-old activist from the Pueblo of Walatowa said at a June rally organized by Pueblo Action Alliance, YUCCA and others, aimed at calling attention to the connection between fires in the state and the need to stop oil and gas leasing. Johnson’s group YUCCA is focused on the upcoming election season and raising awareness over greenwashing and false solutions like carbon capture and storage, which the oil and gas industry is lobbying hard for to be able to justify continued production.

Meanwhile, legal advocates have mounted a tapestry of lawsuits. One, brought by 10 environmental and conservation groups, challenges all new leasing on the grounds that the Interior Department and BLM are failing to uphold their responsibility under the Federal Land Policy and Management Act, which requires the Interior Department to prevent “permanent impairment” and “unnecessary or undue degradation” of public lands from oil and gas development. Another, filed the same day, contends more specifically that the federal government, in its decision to put Wyoming parcels up for bid, failed to address impacts to groundwater and wildlife, such as the mule deer and sage-grouse. If either suit is successful, it could lead to the sales being canceled. That the U.S. still lacks a comprehensive, enforceable environmental justice law on par with the Clean Air Act or Clean Water Act makes it more difficult to pursue litigation on the grounds of human health concerns that could disproportionately impact Indigenous groups and other rural people, low-income people and communities of color.

Other grassroots efforts entail potential legislative pushes for local and state laws that would prevent permitting in places where temperatures have already risen to what climate scientists say should be the upper limit of global warming, if the worst impacts of the climate crisis are to be averted. “At a minimum, lands that have already warmed 1.5 degrees Celsius (1.5°C) should be categorically ineligible for leasing,” Natasha Léger, interim director for Citizens for a Healthy Community, told Truthout, pointing out that counties where leases were just sold in Colorado, including Jackson, Moffat and Rio Blanco counties, have already experienced warming of 1.6, 2.1 and 2.4°C, respectively.

The Biden administration has a breadth of options before it, legal advocates impress. For instance, the administration could declare a climate emergency, and engage in rulemaking to implement statutory requirements that prevent undue and unnecessary degradation of lands on validly issued leases. Or stop issuing new permits to drill on public lands, which the high bidders on these latest leases need to obtain before extraction begins.